Despite numerous predictions from residents, shamefully brushed aside by local councillors, CEC officials and the NTBCC alike, after only a week of deployment 4 out of 5 are already overflowing (attached picture taken on 1 August at 11.30 am).

The fifth one is 95 per cent full.  The Waste Department cannot be reached by telephone, and email enquiries about the schedule for emptying them go unanswered.  In the next few hours we may confidently expect the bins to be surrounded by the extra piles of garbage that residents elsewhere in this great UNESCO city already enjoy, week in, week out.

A Spurtle correspondent passed the bins at 4.30pm this afternoon. They had been emptied. One had been partially refilled with a huge cardboard box. 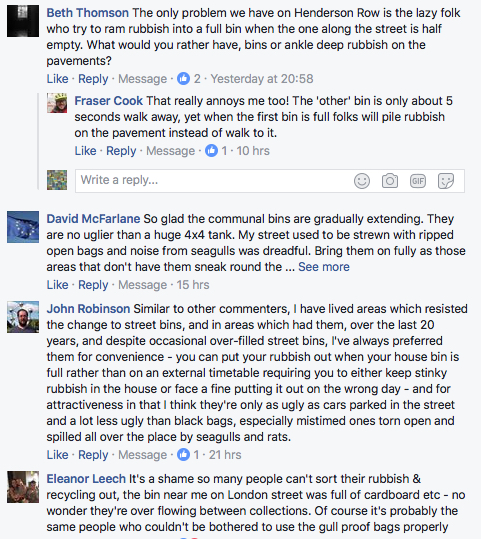 Regarding recent correspondence on 1 August ('Big Bins Don’t Work'), I am happy to see that the predictions of piles of garbage on London Street have, so far, proved inaccurate.

Equally inaccurate is the statement that NTBCC 'brushed aside' concerns of London Street residents during the process of changing from gullproof bag collections to communal bin collections. The community council was asked by a resident of London St. to object to a TRO and considered the request carefully, but there were no valid grounds for an objection, as we explained to the resident personally.

London Street residents were narrowly in favour of changing collection type from gullproof bags to communal bins when asked by City of Edinburgh Council; whilst the community council acknowledges that not all residents expressed a view, its policy is to represent and support residents' wishes in respect to the majority view expressed. However, in this particular  case, NTBCC did not express an opinion either way on the proposed change.

In my view, it is much too early to decide whether the new collection arrangements are working; from the perspective of someone who walks down the street often, the street is much improved by the removal of the permanent display of gullproof bags in various states of emptiness, spillage, and disrepair. The communal bins appear to have been sited unobtrusively compared to most streets, and are mostly hidden by parked vehicles. It is interesting to note that the majority of comments generated from this also support the view that this change is an improvement.

Improvements to both trade and domestic waste collection needs the support of Edinburgh Council as well as local residents – dumping bags beside bins that are full when others close by have spare capacity, or filling waste bins with un-collapsed cardboard boxes does not help. Perhaps one of the communal bins in London Street should be replaced with a recycling bin to provide capacity for those residents who want to recycle packaging material.