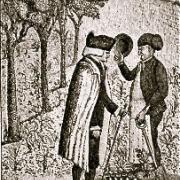 Below, in a fuller version of the article which appeared in Issue 207, Dr David Rae (Director of Horticulture and Learning at the Royal Botanic Garden Edinburgh) recalls the Botanic Cottage’s history, significance, and current prospects for re-use.

Although it was founded in 1670 adjacent to Holyrood Palace, the Royal Botanic Garden Edinburgh (RBGE) has moved location four times. The third site was established in 1763 next to Leith Walk and it moved from there to its current location in the Inverleith district of Edinburgh in 1821–23.

While very little remains of the garden at the Leith Walk site, the gardener’s cottage, which formed the entrance to the garden, remained in an ever-deteriorating state, at one time being rented accommodation and later used as an architect’s office. The importance of the Botanic Cottage, as it came to be known, was rediscovered by members of the Friends of Hopetoun Crescent Garden (site of part of the old Leith Walk Garden) in 2007, when consent had already been given for its demolition. They arranged for it to be recorded in archaeological detail and for its stones and timbers to be carefully numbered and stored.

The importance of the Cottage lies in its provenance and history. The Regius Keeper at the time of its construction was Professor John Hope [pictured above right, with stick], who was a botanist of international renown and a leading scientist at the time of the Scottish Enlightenment, along with men like the geologist James Hutton and the chemist Joseph Black. The structure was designed by John Adam, eldest of the Adam brothers, and extended in the 1780s by James Craig, author of the 1767 plan for the New Town of Edinburgh. An extensive archive survives detailing all the craftsmen who built it. The Cottage provided accommodation for the Head Gardener, with John Hope’s Lecture Room on the upper floor. Many of Hope’s lecture notes and illustrations survive and, in this room, many notable future botanists and doctors were taught.

After demolition, the Botanic Cottage Trust, chaired by Lord Hope, was formed to secure a new future for the building and, after reviewing various sites, the obvious choice became the north boundary of the Royal Botanic Garden. The plan now is to reconstruct the Cottage with as many of the original building materials as possible and to use it as the centre for a new interactive Teaching Garden. So, after many years of neglect and decline, the Cottage will once more be put to use as a centre of learning.

Architects Simpson and Brown, who specialise in heritage projects, are leading the design process. The upstairs room is to be left unaltered, as in Hope’s day, while downstairs the space has been divided into a classroom or workroom, storage space and toilets. Outside, hidden by a single-storey wall at each end, there is space for a glasshouse, potting shed/tool store and picnic benches. A Masterplan for the use and design of the Teaching Garden (the area behind the large beech hedge formerly known as the Demonstration Garden) is being led by landscape architects ERZ.

Funding is being sought from the Heritage Lottery Fund and a Stage 1 application has been submitted. Match funding will be provided by the Royal Botanic Garden Edinburgh and other potential sources are being investigated, such as landfill tax and other grant-giving bodies and individuals.