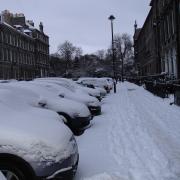 Recent snowy weather has severely disrupted City of Edinburgh Council services across Broughton and the rest of the capital.

CEC's 26 gritting lorries prioritise main routes into the city and routes for emergency services. Next come other main roads and connecting thoroughfares. Side-streets are bottom of the drift. As soon as fresh snow falls, operations revert to Category-1 targets. This is why some local side-streets remain untreated after a fortnight.

Many refuse collection routes are effectively impassable. A CEC statement claimed: 'Refuse collection vehicles, due to their size and weight, are particularly susceptible to sliding on snow and ice.  In many cases drivers have tried to negotiate the conditions but found that they have become stuck or experienced skidding and sliding. Once this happens supervisors have had to make the decision to pull out of some areas given the risk of damage or injury. Even when accessible to cars it is not always possible for our vehicles to access a street.'

[img_assist|nid=445|title=|desc=|link=node|align=left|width=150|height=200]Meanwhile, binmen are being switched to clearing snow/ice from badly hit residential streets and shopping areas. Not surprisingly, rubbish has piled up alongside unemptied wheelie bins, leaving many parts of Broughton resembling the deepest New Town.

For now, CEC advice is to leave domestic bins or black bags out until they can be collected. The same goes for trade waste. Recycling boxes can generally be left out as normal owing to the smaller vans which service them being less prone to slipping.

So far, Broughton's schools have not had to close. Updates can be heard on Radio Forth, or read at www.edinburgh.gov.uk.

If local residents know where any of Edinburgh's 1,600 grit buckets are, and they find one with some grit left in it, CEC encourages them to dig in. However, for maximum effectiveness, snow and ice should be cleared first.