CONVERGENCE OF THE TWAIN 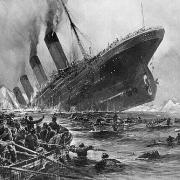 David Carfrae of Canonmills says he is an admirer of Thomas Hardy's poem about the RMS Titanic.

He suggests the Iceberg was a bigot.

We're not sure about Mr Carfrae's political analysis, but would at least like to thank him for raising the tone.

And as the smart ship grew
In stature, grace, and hue
In shadowy silent distance grew the Iceberg too.

Alien they seemed to be:
No mortal eye could see
The intimate welding of their later history.

Or sign that they were bent
By paths coincident
On being anon twin halves of one August event,

Till the Spinner of the Years
Said "Now!" And each one hears,
And consummation comes, and jars two hemispheres.