NEWS FROM THE MEWS 16 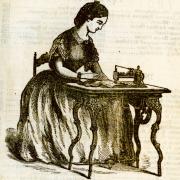 The sewing machine has now fully stood the test of time, and has fairly established not only its business position but its domestic one. It is in every tailor’s or milliner’s workshop, and ought to be in every household. In our family circles it properly comes in place of the spinning-wheel, which our grandmothers spent the hours they spared from their domestic cares, and its pleasant birr reminds us in some respects of the discarded jenny.

But the sewing machine has a humming music of its own, or a sound we ought willingly to take for musical, looking to its magical results in promoting the economy of the household. To ladies in high life it is found a source of something better than amusement, for its work is as beautiful as it is speedy; and whether it be the simplest hem or the richest embroidery, the machine stands like a winged messenger ready to fly at command.

If any ladies there be to whom industry is not a necessity, it will certainly be a pleasure with so efficient a handmaid at their feet as the sewing machine. In households where economy is not a mere abstract virtue, the sewing machine becomes invaluable, and will soon repay its purchase. Indeed, there is no domestic investment which, if due application be made to conquer the very slight difficulties which beset the beginner, will be more certainly remunerative.

In a family of seven or eight persons, if either mistress or maid become an adept at the machine, it will save its price probably within a year. The great desideratum is to secure a good one; and while there are many good machines in the market, we have pleasure in introducing one to public notice which is both good and new. 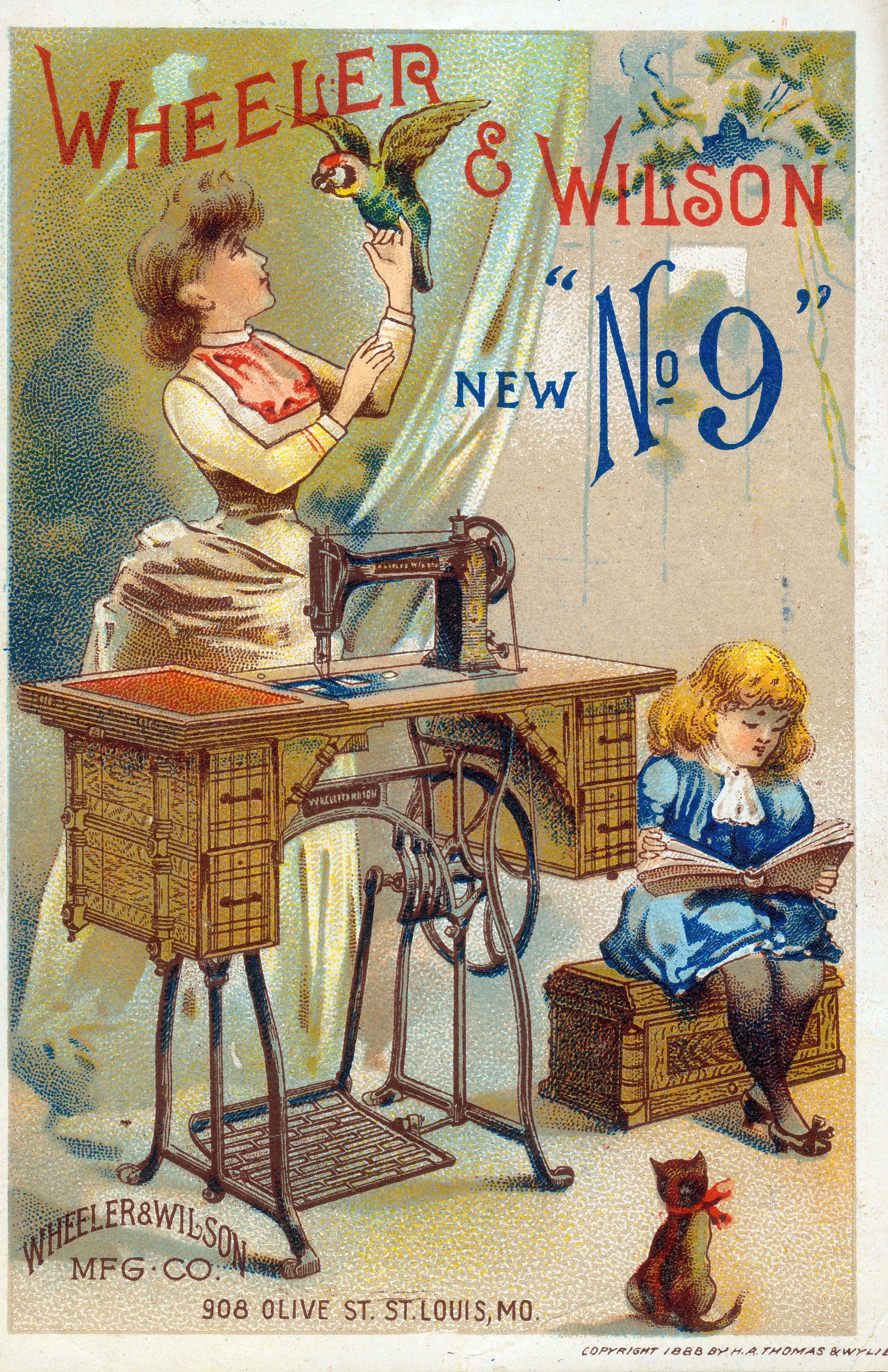 Merits of the new machine

The new sewing machine, patented by Mr Macpherson, Thistle Street Lane, Edinburgh,[2] is one which will probably be overlooked by purchasers who are in search of cheap machines, for the great object that the patentee had in view was to make one which should be fit for any kind of work, made from hardened and finished materials, and which should not be liable to go out of repair.

Price in such cases depends on finish; and whether one buys a watch or a sewing machine, the first thing is to see to the works. In the present case the patentee has made it his first endeavour to produce a machine which should keep faith with the worker, just as a good watch always keeps time. A great deal of attention also has been bestowed on the minutiae, and the following notes appear to us to state with sufficient clearness the distinctive merits of the new machine:— 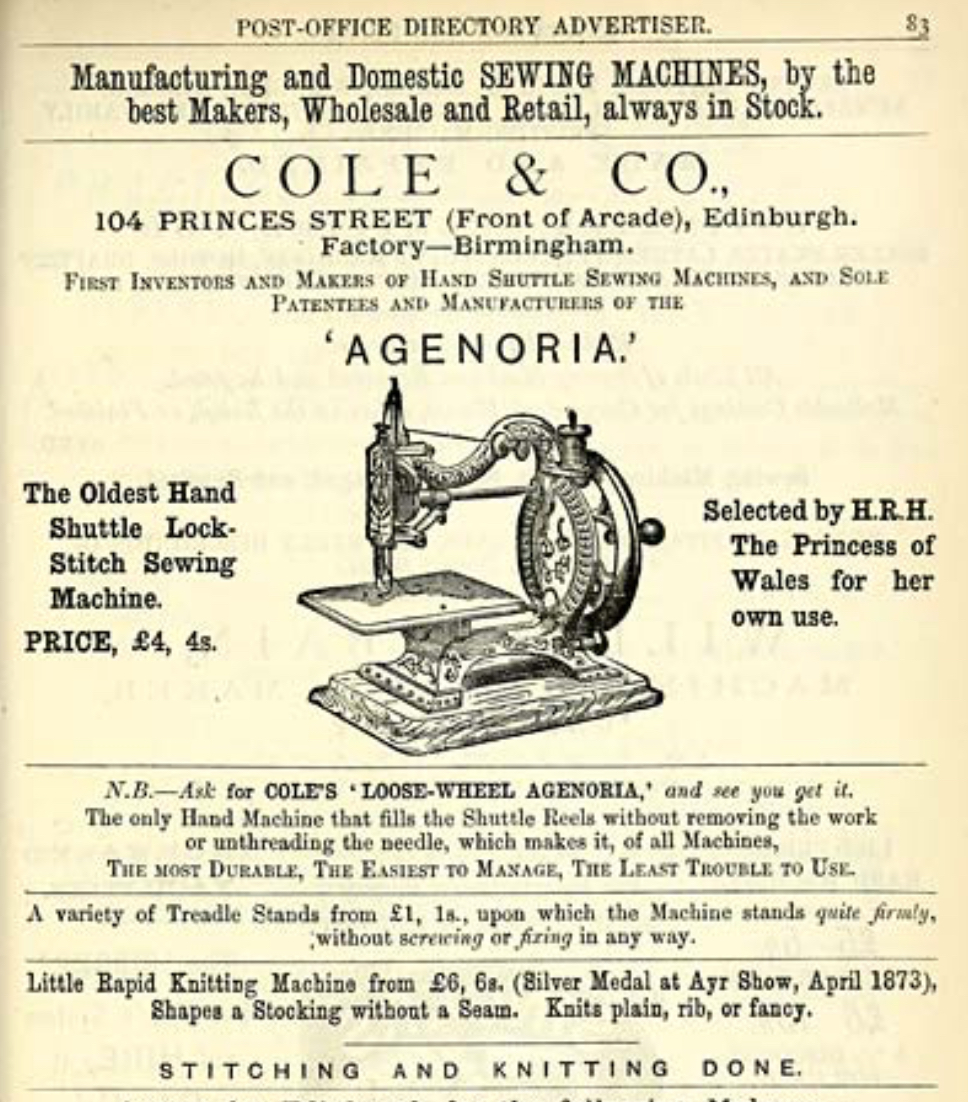 The Macpherson machine supplies a new, simple, and effective shuttle possessing very peculiar properties. It has always been found that the weaver shuttle had many defects when applied to the sewing machine, and ever since the introduction of the machine, a better shuttle has been eagerly sought for.

The machine produces the finest or coarsest stitch on cotton, linen, silk, or woollen cloths with perfect regularity, with great speed, and the almost entire absence of noise.

It also makes the chain stitch as well as a new stitch; the lock-chain stitch, which remains a fast strong stitch, if left as the machine sews it, but if the locking thread be withdrawn, which can be done with very little trouble, the whole sewing is speedily taken out. In the case of trimmed skirts. &c., this facility for removing the trimmings will be greatly esteemed by ladies and dressmakers: the ordinary lock stitch presenting a great barrier to undoing the work.

This compound stitch, or the chain stitch all over, is also nicely suited for embroidery. The shuttle of the Macpherson machine possesses the remarkable property of making all these three stitches without any other change than merely reversing the way in which the cloth is put into the machine.

To make lock-stitch it is fed one way, to make chain-stitch, or lock-chain stitch, it is fed in the opposite direction. The tension of the thread is a very important matter in sewing machines, and in this machine the upper and lower threads are under the most complete control, the turning of a thumb screw regulating either of the threads, which may be done while the machine is working.

The chain stitch is made with one thread; the other two stitches are made with two threads. The arrangements of the mechanism expose the whole progress of the stitches without undoing any part of the machine. The needle with its thread, the shuttle passing through the loop of the needle thread, and carrying its bobbin within it, forming the lock-stitch, or lock-chain stitch, or chain stitch, are all distinctly seen while the machine is working, which to beginners is a great advantage.

Little or no instruction is required to enable any one to sew at once perfectly; and as the machine is easily driven, and certain in its operation, the frequent disappointments experienced in most cases at first will be successfully removed. 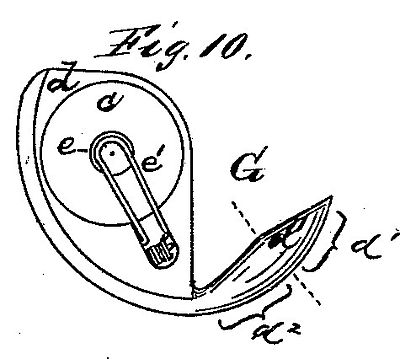 The shuttle is circular-shaped, about the size of a medium Geneva watch, and half an inch thick, containing a bobbin within it holding from 50 to 100 yards of thread, according to the thickness. It turns upon its centre, goes right through the loop of the upper thread, and locks with the thread of the bobbin in the shuttle, the shuttle retaining the slack thread of the first entered loop till a second one is entered upon, when the first loop is simultaneously liberated and drawn tight by the shuttle alone without the intervention of any spring or other aid.

The confusing springs, wires, and levers that encumber many of the older shuttle machines are entirely discarded, and no pause in the motion of the needle is required to allow the shuttle to pass through the loop of the upper thread, so that the speed can be driven up to the utmost that thread will bear. The invention admits of being applied to the well known Wheeler & Wilson machine without much expense.

Notwithstanding the many hundreds of patents for sewing machines, they may be arranged in two classes, without including the looping machines—namely, the shuttle machines, and the Wheeler & Wilson machine. The Wheeler & Wilson machine has a disc species of shuttle which catches the upper thread without passing through it, and casts it over a bobbin containing thread in order to lock the stitch. Of this kind there is one other variety called the elliptic machine, because the hook that lays hold of the upper thread moves in ellipse.

All the other thousand claims for being a different machine differ only in some minor detail, but have the same common alternating weaver’s shuttle—a beautiful contrivance for its original purpose, but not suitable for the sewing machine. The Macpherson sewing machine is therefore something new in this most useful and wonderful contrivance, and, in its more certain and simple working, will remove much of the perplexing dissatisfaction occasioned to beginners.[3]

The machine, we may add, can be seen at work in the rooms of the manufacturers, Messrs Sang & Son, 35 Cockburn Street.[4]

[3] Two-and-a-half years later, Macpherson’s invention was patented in the USA: ’92,068. — Daniel Macpherson, Edinburgh, North Britain.—Sewing Machine.—June 29, 1869. Claim.—1. The conical shuttle, having a lip, F, recess D, and central pin E, for supporting a detachable spool, all constructed as described. 2. The combination, with the conical shuttle, of the hinged plates q q1, with their curved V-shaped edges adapted to the recess, h, of the shuttle, as and for the purpose specified. 3. The combination, with the conical shuttle, constructed as described, of the spring R and set-screw S, when the spring is arranged and bears upon the shuttle, so as to first detain and then release the loose loop of thread as set forth.’ , ‘Annual Report of the Commissioner of Patents’, Government Printing Office,Executive Documents Printed by Order of the House of Representatives during the Second Session of the Forty-First Congress 1869–’70, Vol. 9 (Washington: Government Printing Office, 1870), p. 332.

[4] The Edinburgh Evening Courant (11 Dec. 1866) reports a meeting of the Royal Scottish Society of Arts at which Mr Sang read out a paper concerning Machpherson’s machine. Because it was constructed with ‘steel axles in cast-steel bushes in place of iron or cast-iron, as the common machines were made,’ he said, they could afford to sell them at £10 each. Some conversation took place in reerence to the letter which appeared in the newspapers some time ago, purporting to be from a gentleman of the medical profession, setting orth that the machine, when worked in a certain position, was injurious to health. Dr Thomas Strehill Wright (President of the Royal Physical Society of Edinburgh) said that the medical gentlemen of Edinburgh had no faith in the statements referred to.’

News from the Mews resumes on Monday in April 1868.