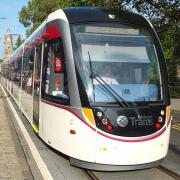 Anticipating a decision by the full Council to approve the Final Business Case for extending the tramway on 14 March, CCTT this morning issued a statement.

In general it backs the extension, but outlines five ‘project-critical’ measures which it believes will help ensure success. Progress on these measures is a condition for CCTT’s continued cooperation during the six-month Early Contractor Involvement which would follow approval, and the construction period afterwards.

In Spurtle’s opinion, this is a thoughtful, well-reasoned, and supportive response. We reproduce it in full below.

In advance of Edinburgh Council's imminent final decision to go ahead with the tram extension to Newhaven, which represents a major intervention in the areas covered by the four Community Councils along the route, CCTT has reviewed the information gathered from documents in the public domain and provided in monthly meetings with the Tram Project Team.

While we continue to support the broad principle and ambitious aims of the tram extension, a number of our concerns have yet to be fully addressed.

We recognise that a strong feeling exists among many people in our communities that this project is being pushed through with undue and unnecessary haste.

We remain sceptical about the absence of sufficiently robust progress or commitment over the following measures which are essential if the tram is to achieve its steep, environmental, mode-shifting targets and if the collateral damage of the inevitably disruptive construction period is to be reduced.

1.  Fully Integrated Ticketing System (FITS). This is key to achieving a material modal shift from car to public transport (as opposed to the 87% modal shift from bus to tram, as projected in the tram business case).
2.  Staged construction sites. To avoid simultaneous closure of: (a) Leith Walk; (b) Constitution Street to Bernard Street; and (c) Melrose/Ocean Drive to Ocean Way. In parallel, CCTT seeks bus priority route deviations with quality temporary bus stops. These two measures are key to minimising disruption to the daily lives of 75,000 residents and 1,500 businesses.
3.  Controlled Parking Zones along the tram corridor. This is key to preventing the tram corridor from turning into Edinburgh’s largest park and ride area.
4.  Constitution Street. Construction of strengthened pavements and the introduction of a streamlined dual permit system for scaffolding, as well as further serious engagement with residents and businesses about the detail of the design for the street.
5.  Early and maximum clarity on the logistics intended to serve local businesses during construction. This is necessary to allow traders (along the tram corridor and, if necessary, along the diversion routes) to plan ahead and make appropriate arrangements that will allow them to survive the inevitable disruption during the construction period.

CCTT has been a valued partner of the Tram Project Team during the months leading up to this point in the process, contributing local knowledge, and providing a critical sounding board.

If real progress can be achieved in relation to our key concerns and the above measures, we will stay involved and work constructively with the Tram Project Team during the Early Contractor Involvement and construction periods.