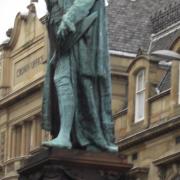 If you are interested in the campaign to save Chambers as an Edinburgh publishing institution, visit  www.publishingscotland.co.uk/Membership/default.aspx?pid=156

In the first quarter of the nineteenth century two Chambers brothers each made a connection with Broughton's history, before going on to found the famous Edinburgh publishing firm that bore their names. Much more recently that firm moved into Broughton premises.

William and Robert Chambers were born in Peebles, in 1800 and 1802. They came to Edinburgh in their teens after their father's business failed, looking for work. William started as an apprentice to bookseller John Sutherland, in Calton Street. Robert arrived a couple of years later after completing his schooling in Peebles; and rented a wee bookshop of his own on the far side of Leith Walk, opposite Balfour Street, when he was sixteen. When the owner wanted to carry out extensive repairs Robert moved to premises farther down the Walk. By the time William had finished his apprenticeship the repairs had been completed and he opened his first shop on the same site.

Each brother progressed in the book trade in his own way, William developing technical expertise in printing and the more scholarly Robert doing more writing – pooling their skills in joint projects from time to time. In spring 1823 William moved into a shop in Broughton Street: 'William Chambers, stationer and printer, 23 Broughton street' appears in the Edinburgh and Leith Post Office Directory, 1824-25. At some point he moved up the street a bit and changed the description of his business: the 1832-33 Directory records 'William Chambers, bookseller and circulating library, 47 Broughton street'. By the next edition of the Directory he has gone: 'A.P. Potts, bookseller' is occupying No. 47. In the same edition there are  multiple entries for the Chambers brothers at other addresses, individually or collectively: they'd taken off!

Meanwhile Robert had published his Walks in Edinburgh in 1825, which included a description of how the village of Broughton had been transformed in the first quarter of the century:

'This drowsy, awkward little village has been surrounded and impaired by troops of handsome new houses, which seem to threaten it with speedy destruction. The contrast between its low, tile-roofed cottages, narrow, unpaved tortuous streets, and generally mean appearance, and the regular and beautiful modern streets amidst which it is placed, may afford matter of merriment to the visitor. Yet it is not many years since the citizens of Edinburgh used to send their wives and children to lodge in these miserable hovels  during the summer months, for the benefit of their health – themselves, perhaps, continuing to occupy their houses in town during the week, while attending business, and visiting their families here upon a Saturday night or Sunday morning, in order to spend the day of rest in domestic happiness.

'Broughton could then boast of a sort of rural seclusion: for so little communication was there between the village and the city, that an old blacksmith, who lived all his life by the way-side, and died a few years ago at the age of eighty, remembered having sometimes observed only three individuals pass his smithy in the course of a whole day.'

In February 1832 William Chambers published the first number of his weekly Chambers's Edinburgh Journal, and quickly sold 30,000 copies – 'the vanguard of all that is wholesome, sensible and unsectarian in cheap literature' James Grant calls it in his Old and New Edinburgh. Robert was only a contributor until No.14, but then became joint editor with William  – the firm of W. and R. Chambers had arrived.

The firm's business premises were in Waterloo Place for several years, with printing works in Roxburgh Close off the High Street. Then in the 1840s they moved up to the north side of the High Street, where the range of their publications and the size of their premises grew steadily for several decades. A twentieth-century move took the firm to Thistle Street; and a second to Broughton. There were offices in Hopetoun Crescent and in the building on the corner of Annandale Street where the Mosque is now, with a warehouse next door in East London Street where the carpet business is currently (2009). All staff moved to the Crescent in the late 1990s.