NEWS FROM THE MEWS 29 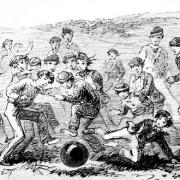 A fine of 1s each, with the option of 24 hours’ imprisonment, was imposed on each of five boys, whose ages ranged from 12 to 15 years, for playing football on Sunday evening last in Gilchrist Court, Greenside.

About one o’clock this morning a constable on duty found a woman named Ellen Black, apparently about twenty years of age, lying on the ground at the foot Greenside Row. She was taken to the Royal Infirmary, and was found to have sustained a few bruises on the body, which, although not of a dangerous nature, will detain her under medical care for some time.

Two men informed the police that shortly before she was found, they had seen the woman thrown over the Calton Hill by a man, who was evidently associated with her. The police have instituted inquiries regarding the affair. 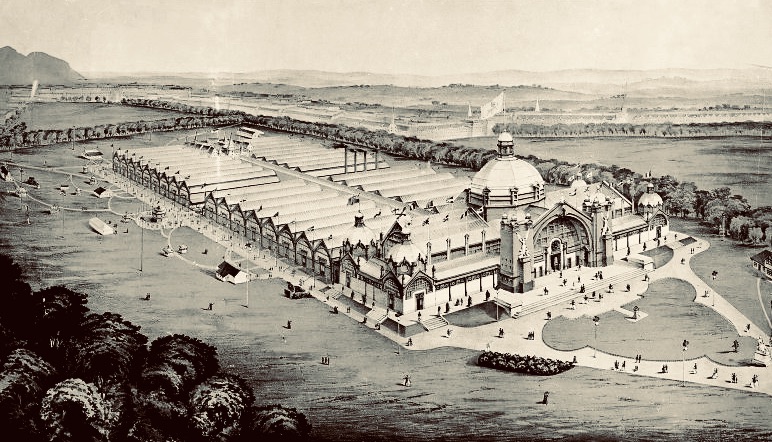 AN EXHIBITION PROGRAMME SELLER AND HIS ENGAGEMENT.

In the Edinburgh Burgh Small-Debt Court today—Mr Curror. S.S.C., and Councillor M’Laren on the bench—Donald Kay, residing with his father, John Kay, porter, Cumberland Street Lane, sued Messrs T. & A. Constable, Thistle Street Lane, for £4 10s, his wages as a programme boy at the Exhibition from 28th August to the closing of the Exhibition at the rate of 10s a week.[1]

Pursuer stated that he was engaged for six months, and was dismissed without any warning or justifiable cause. Mr Davidson, Messrs Constable’s manager in the Exhibition, deposed that the terms of pursuer’s engagement were that he was liable to dismissal at a moment’s notice, without any reason whatever. Everybody in the Exhibition employed by Messrs Constable were under that agreement.

The boy was never told that he was engaged for six months, though he was informed that his employment would hold good for six months if he behaved himself. This boy had been warned about staying away too long at his meals, and he was fined for not behaving himself.

Several programme boys made as high as 20s a week, but this one could only make 8s with his commission. Witness had fined the boy 6d for going to the lavatory. The girls employed in the Exhibition had a written agreement, but the boys had not. Two programme boys said that the terms of their engagement were instant dismissal without reason, but on the other hand they had to give a fortnight’s warning.

The Justices thought that pursuer had not been unjustifiably dismissed. As the boy was bound to give a fortnight’s notice, it might be fair to give him a fortnight’s pay in lieu of warning, However, it was clearly proved that in dismissing the boy no warning was required, and they therefore granted defenders absolvitor.

[1] The printing and later publishing firm of Messrs Constable moved to this address in 1833. The sum Donald was suing for was equivalent to about £369 today, or 13 days’ wages for a skilled tradesman in 1890. The International Exhibition of Industry, Science and Art was staged in the Meadows between 6 May and 30 October 1886.

This afternoon, a somewhat singular car accident occurred in Leith Walk, in the vicinity of Greenside Row.

A man named William Welsh, forty-five years of age, and a polisher by occupation, residing at 12 Greenside Row, was, it appears, crossing the street, and not observing a car rapidly ascending the hill he ran up against it.

He was violently thrown to the ground, and one of the wheels of the car passed over one of his arms. The arm was almost completely severed from the body, while the man was also much mutilated about the face, his chin being severely cut.

The injured man was immediately conveyed to Edinburgh Royal Infirmary, where he was attended to by Professor Cheyne.[2]

Scott returned to the stable about 4 a.m. with a cab, and shortly after 6.30 the occupant of the house next door noticed smoke in his house. On making an examination he discovered that fire had broken out in Scott’s premises, and immediately sent a messenger to St James’ Station.

On the arrival of the firemen from the head office, a liberal use of water prevented the fire spreading. When the firemen entered the premises they found that two horses had been suffocated; while on the floor above a goat, a dog, and a number of pigeons were found dead.

The damage is estimated at between £200 and £300, and is covered by insurance. 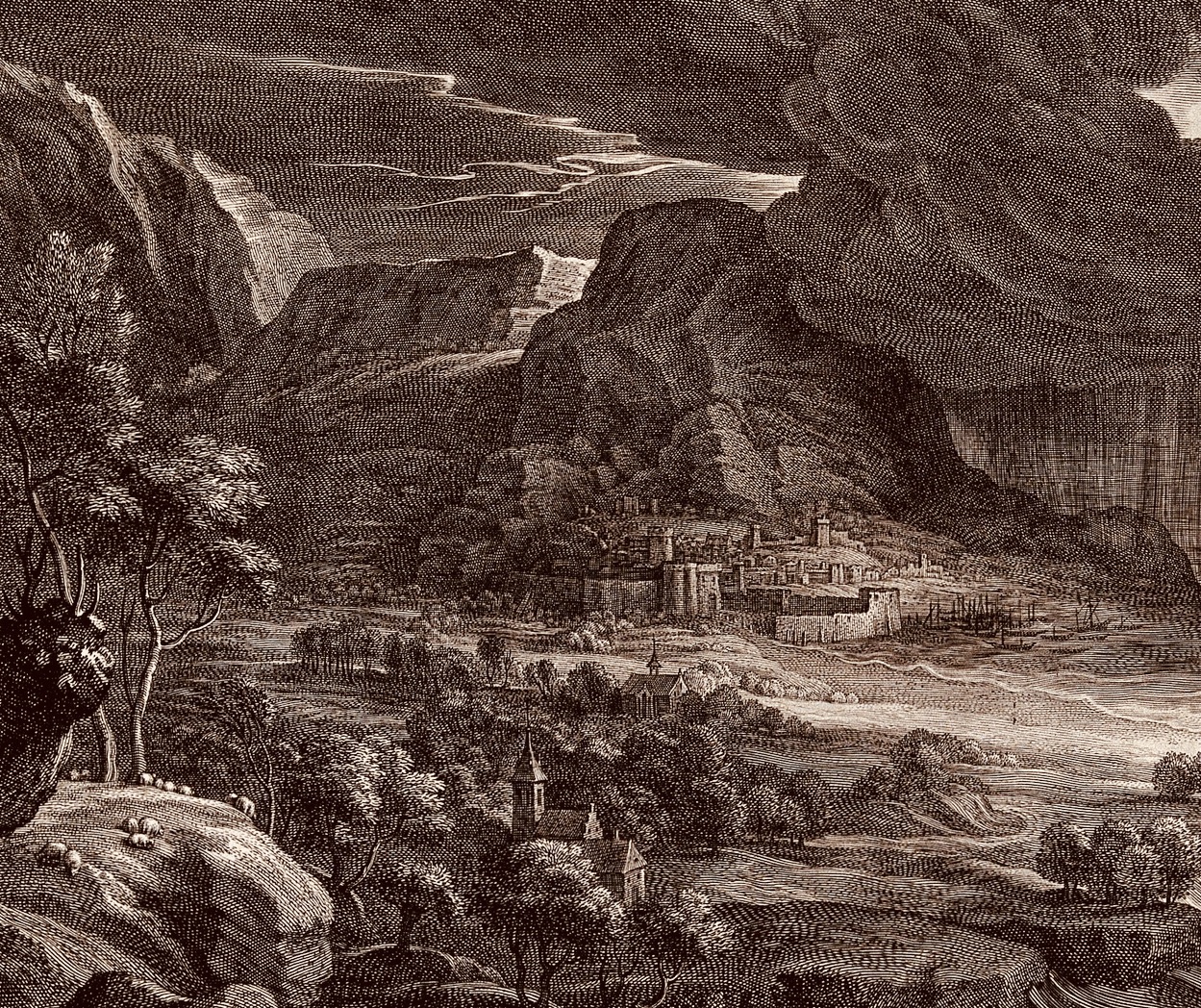 The broken and stormy weather which, during the past few days, has been making itself disagreeably and even seriously felt in various parts of the country, yesterday included Edinburgh within its scope, and the Scottish capital was visited by one of the most severe rainstorms it has experienced for years.

The rainfall recorded in the district was not, it is true, phenomenally heavy—it was somewhat over half an inch, or, to be strictly accurate, 0.68 in.; but the downpour was so sharp and sudden as to cause flooding more or less serious in many parts of the city. […]

The houses in Greenside experienced the most serious effects of the storm. A number of small houses lie there at the foot of two steep hills—Greenside on the south and the Calton Hill on the east—and at this spot, owing to the converging of the two streams of rain, and to the surface drains becoming choked and ultimately covered to the depth of a few inches by the large quantity of earth washed down from the Calton Hill, the rain rapidly accumulated, and at length rushed down the stairs leading to the underground houses.

Light articles of furniture were soon afloat. Surprised, the inmates hurriedly piled their goods one above another, in the hope that the flood would not reach them; but in half an hour, even after the rainfall had ceased, the floors were deluged to a depth of from six inches to nearly two feet. Altogether the houses of eight families were flooded—the water reaching those at the back of the tenement, which are at a lower level, by getting under the floors of the front houses, and forcing its way along.

All the people affected are poor, and could ill afford to sustain the damage caused to their belongings. An old woman named Wilson, who, it seems, is in feeble health, was in bed in her dwelling in the rear of the tenement when the water rushed in. In a neighbouring house, where a boy of three years lay on a sick-bed, the water extinguished a fire. An elderly woman named Vibart had to wade out of her shop, leaving submerged in muddy water clothes which had been sent to her for mangling.

Staffs of workmen from the Burgh Engineer’s and the Cleaning Departments were soon on the spot, and in time cleared the choked drains, and removed the accumulation of mud which had been swept down from the hill. All the inundated houses had been rendered uninhabitable, and the tenants were ordered to remove. Those who succeeded in renting other houses in the locality carried thither their furniture, while one or two persons who were less fortunate put their bedding on the road to dry.

Greenside Row has been flooded several times during the last twenty years, the occasion prior to yesterday being August 1884. Part of the workshops of Messrs. G. Callam & Co., braziers, about 150 yards distant from the houses, were covered by six inches of water, which the workmen got rid of by partially removing the flooring. It was calculated that over thirty tons of earth were washed off the Calton Hill by the flood—about five tones on to the road at Waterloo Road (the earth having in this instance been carried downhill for about 200 yards), and about twenty tons on to the lower end of Greenside Row. […] 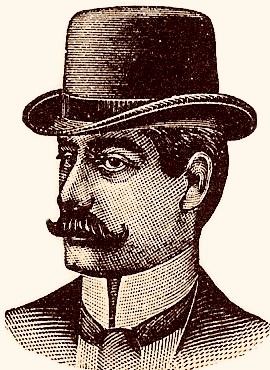 FOR SALE, Well-bred BROWN GELDING, 151/2 hands; too light for owner’s work, warranted steady in saddle and all harness. Price low to any one who can give a good home. 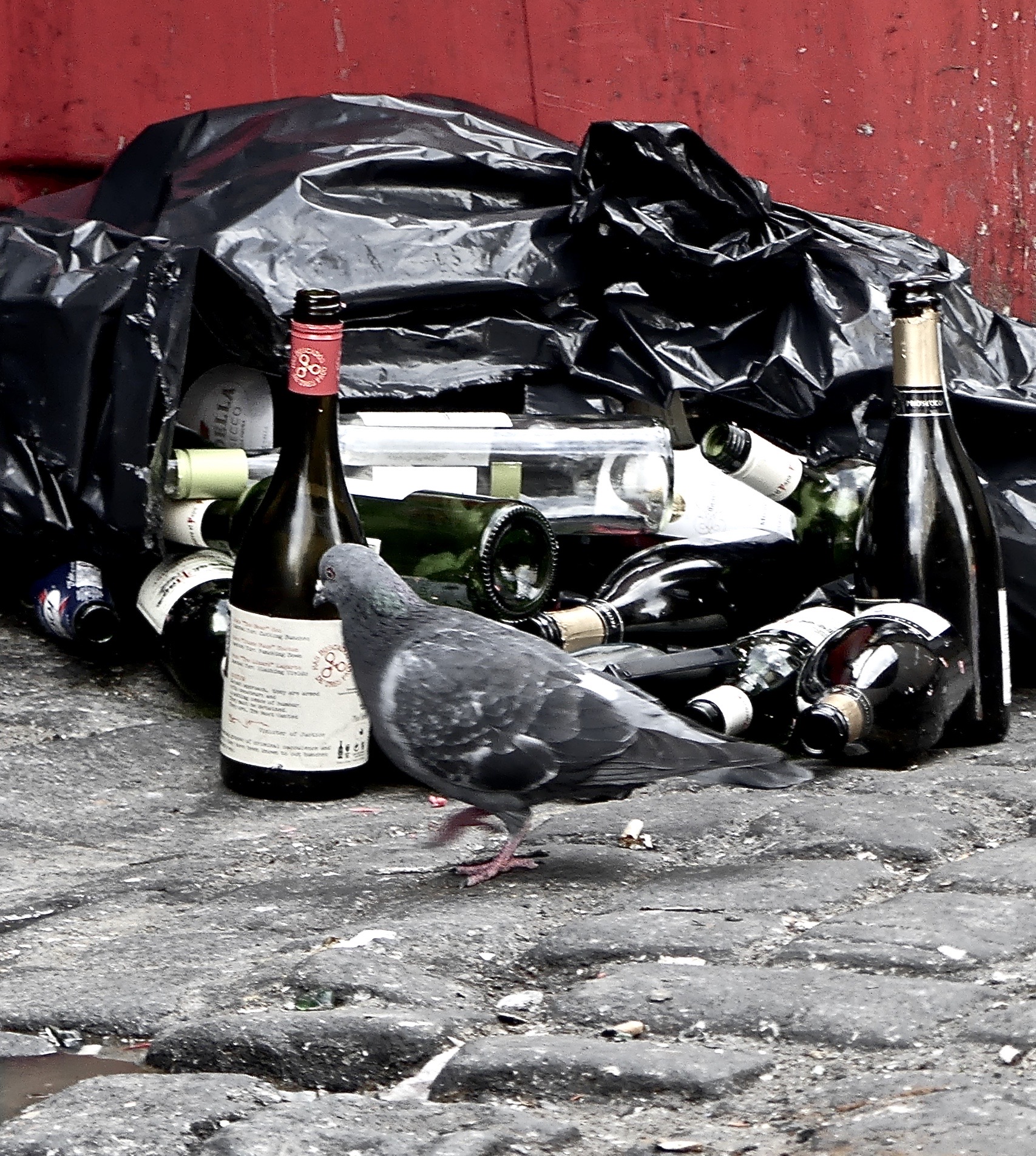 CRUELTY TO CATS—In the Edinburgh Burgh Court yesterday, John Smith, a wood turner, residing in Gilchrist Entry, Greenside, and Thomas Park, Gilchrist Lane, were each fined 5s., with the alternative of three days’ imprisonment, by Bailie Roberts, for torturing a cat by jumping on it and kicking it on Sunday, 4th inst. William Alexander, a medical student, was fined 7s. 6d.,[3] with the alternative of three days’ imprisonment, for ill-treating a cat in Marchmont Crescent on the same date. The prosecutions were made at the instance of the Society for the Prevention of Cruelty to Animals. 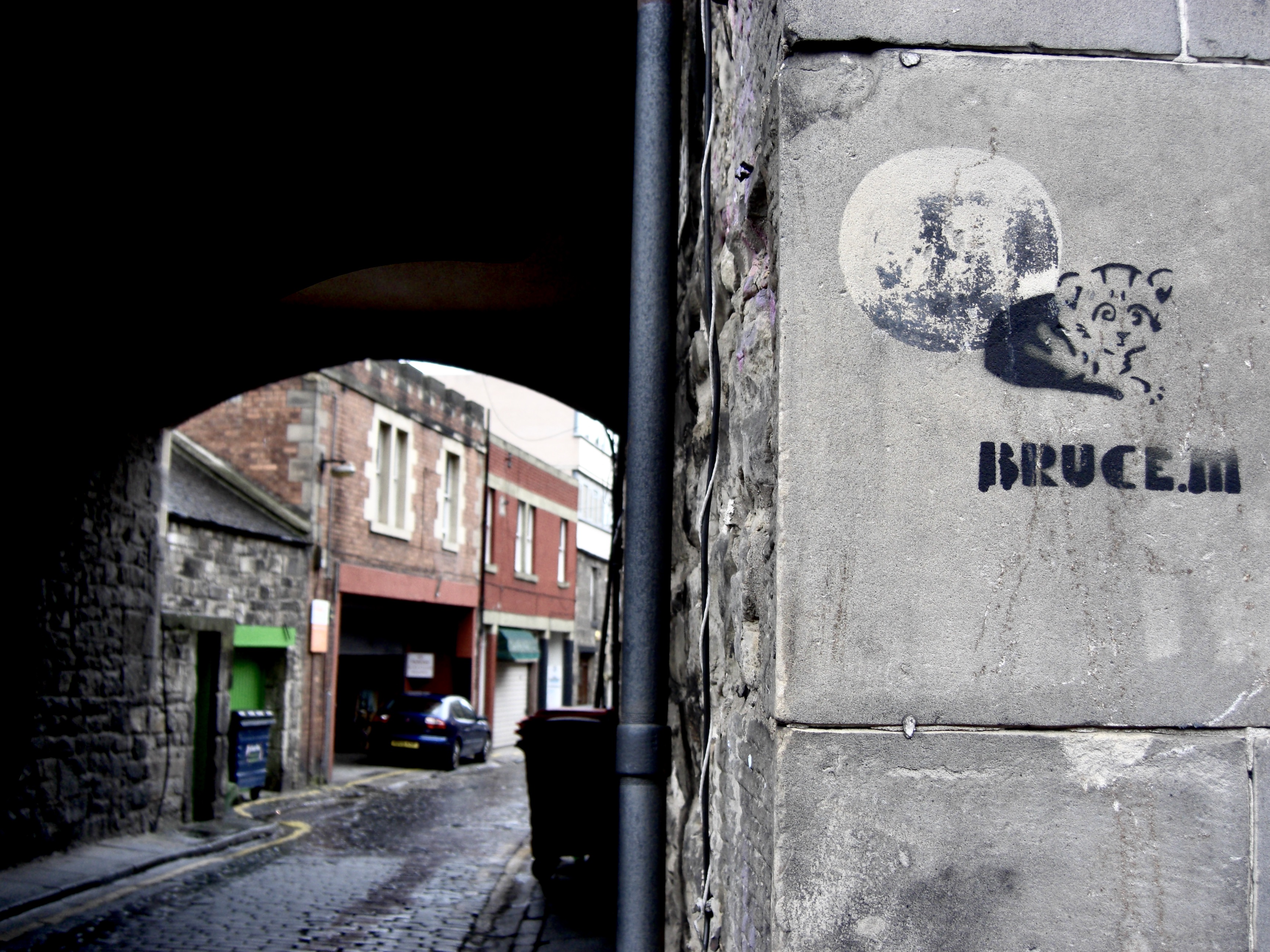 ROBBERY BY VIOLENCE IN EDINBURGH.—As the treasurer of a friendly society holding its meetings in the vicinity of Pilrig, Edinburgh, was coming through Broughton Street Lane on the way to his house at 10 Broughton Street on Friday night, he was thrown down by a couple of ruffians, and robbed of a bag containing contributions from members of the society amounting to about £10, and also his watch.

His efforts to shout for help were checked by one of the men placing his hand over his mouth.

The treasurer, whose name is Main, lay helpless for some time after his assailants had made off. He ultimately informed the police, and a search was made the same night by a detective, who, strangely enough, found Main’s watch lying uninjured close to a stable door, and the empty money bag secreted between a heap of rubbish and a wall, both near the scene of the encounter. The police are continuing their investigation.

News from the Mews will return on Monday in 1889 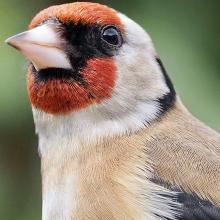 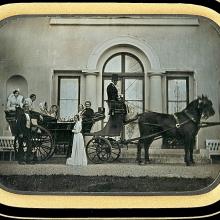 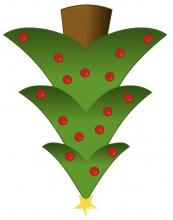