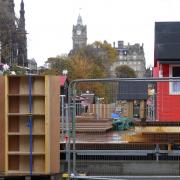 QUESTIONS, ANSWERS, AND A MOTION AT TODAY'S CULTURE & COMMUNITIES COMMITTEE

Below we summarise their points, and the question-and-answer session which followed. Then we move on to a motion by Councillor Staniforth and the Scottish Greens.

EB said they were acutely aware of the current debate in Edinburgh, and in particular the focus on events in East Princes Street Gardens.

He pointed to the Festivals’ cultural, commercial, and social value, and said Underbelly was very proud of how they had been developed creatively. It was a cause for celebration.

A blizzard of facts and figures followed too fast for us to transcribe accurately. Instead, we attach Bartlam’s presentation in full at the foot of this page.

He pointed to the huge numbers who visited, to independent assessments of money generated for the city, and to the popularity of the Festivals with locals.

He said that profits generated by Underbelly were in part reinvested in the events … something they were not contractually obliged to do.

The Festivals were substantial employers and paid all workers the national living wage, regardless of age. There are no zero-hour contracts.

The Winter Festivals had achieved enormous media and social-media reach, and were widely regarded as the world’s premier festival event. 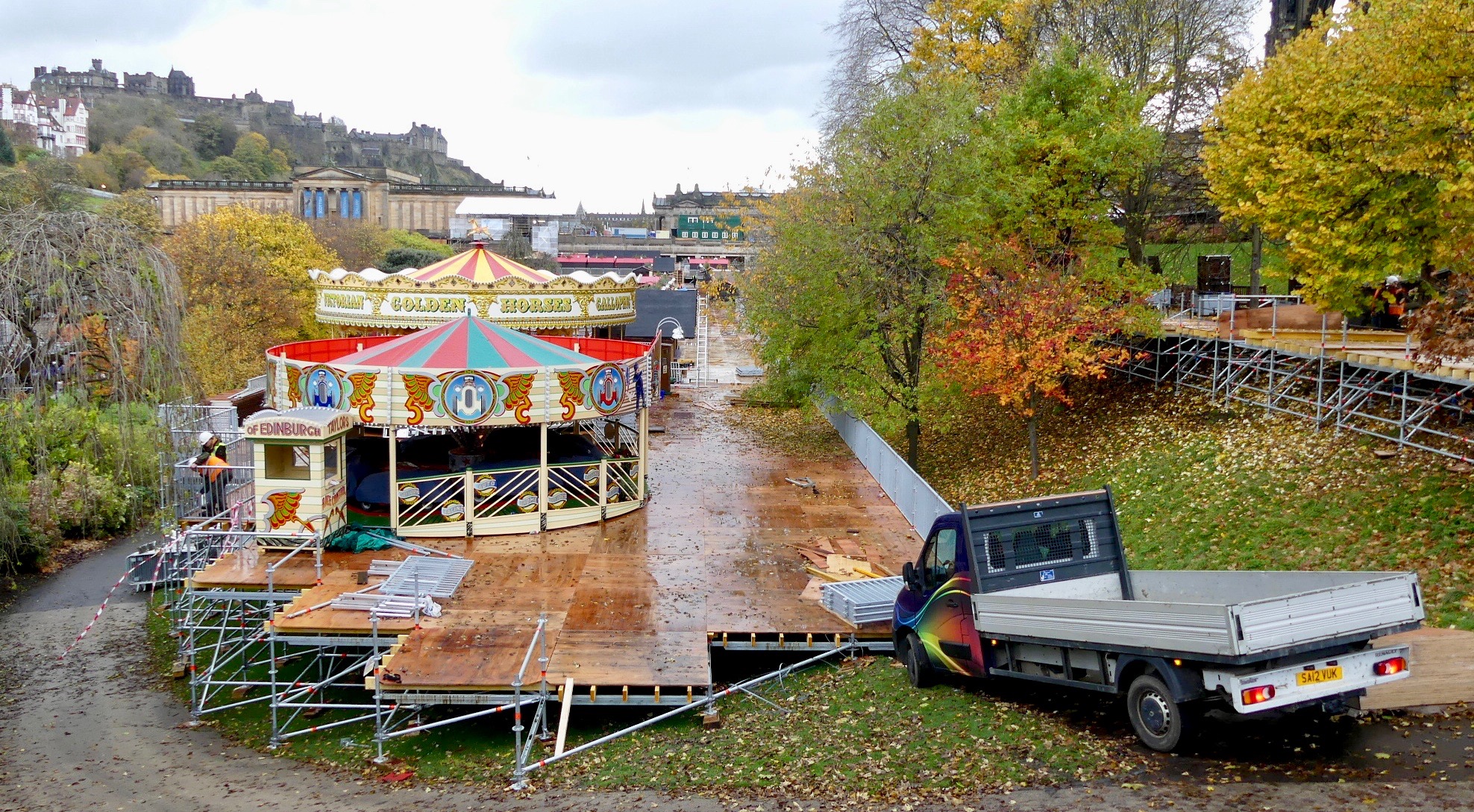 Cllr Alex Staniforth (AS) said nobody was against the Winter Festivals. But why had Underbelly stressed time pressure as driving the two-year extension of its contract when no such time pressure seemed to have propelled the need to secure planning permission? Why was Underbelly so tardy at following Council rules?

CW: All parties should have come to a solution sooner. The engineering work required was substantial.  Design (involving hundreds of people) began in in April, and wasn’t signed-off until October. Only at that point could Underbelly seek  to begin the planning process.

AS rejected this response. Why couldn’t Underbelly at least have sought planning permission in principle?

CW: We didn’t know until 12 October that we even had a Christmas event.

AS: Based on his experience of sitting on the Planning Committee, AS said lots of people have vague plans at the outset. Planning permission in principle would have been possible in Underbelly’s case. Why didn’t you  seek it?

CW: We didn’t know what we were applying to do. Nothing had been decided.

CW: Edinburgh’s Christmas makes a surplus, and receives no public fee or subsidy. Any surplus is a confidential matter, but it is partially reinvested into both Christmas and Hogmanay events. Underbelly absolutely adheres to Council guidelines on working practices.

Cllr Phil Doggart (PD) asserted that Underbelly’s approach to EPSG had generated ill will. He asked whether Underbelly was aware of previous Council motions calling for: (1) a dignified no-work cordon around the Remembrance Garden until after 11 November; (2) No high structures in EPSG.

CW: All actions concerning the cordon in EPSG had been agreed through the Events Planning and Operations Group.

PG: That response didn’t come close to answering my question, and neither did your response to Cllr Staniforth. Regarding the Garden of Remembrance, I take it Underbelly was unaware of the cordon. Did you have any early idea of what the EPSG scaffold structure would look like?

PG: Should you have shown plans earlier?

CW: We weren’t asked to. We shared them with officers. 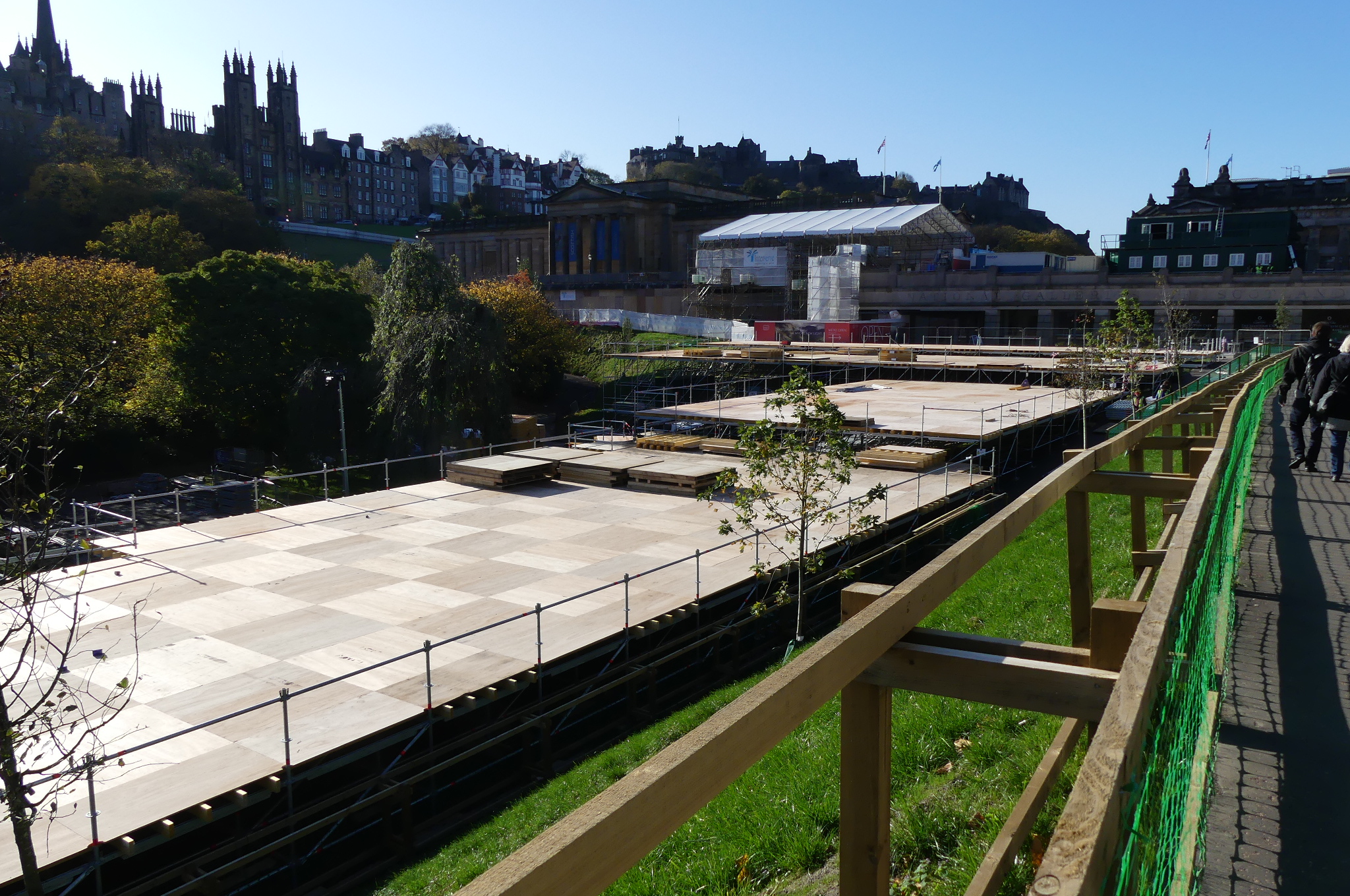 Cllr Hal Osler (HO): In the light of current controversy, what would Underbelly have done differently.

CW: The changes were driven by National Galleries of Scotland development. We and others have known about those for 4–5 years. ‘It is of regret’ that a response occurred so late. We wish it had happened several years ago.

HO: So you would have done nothing differently?

CW: We wish the process had started years ago, not in March.

Cllr Derek Howie (DH) shared previously mentioned concerns regarding the Garden of Rememberance. He noted that as the Festival’s success grows, so do crowds. There are increasing crowd-related concerns across all Festivals. Please comment. In particular, how will you ensure adequate disabled access?

Councillor Karen Doran (KD): How big is the increase in EPSG events?

CW: Christmas 2013 was much smaller in terms of area. It grew in 2014, and then remained the same size until 2018 (150 stalls) There are now just over 160 stalls, but two fewer rides this year. This year will be approximately the same size as last year.

KD: What steps have you taken to protect trees, especially avoiding compaction of soil around roots? What policies do you have.

CW: We take great care. We build around trees. We have agreed with the Council not to build 4–5 stalls which would have been too close to trees. Underbelly will pay for post-event decompaction of soil and other remedial work. Would welcome KD’s suggestion of walk-around with Woodland Trust representatives.

CW: It was signed-off on 12 October. Some parts still await a Building Warrant. We expect those to be signed-off this week.

MB: What happens if they’re not?

CW: Huge amount of work has already taken place. There may be a few more changes to make, in which case Underbelly will make them.

MB: What is the contingency plan if no Building Warrant is signed-off?

CW: Extensive and detailed engineering works has already taken place. Photos on social media don’t represent the reality. Any changes will be small and achievable.

In the afternoon, Cllr Staniforth moved a motion on behalf of the Green Group (see image below or follow this link).

Most controversially, the motion urged looking for places to move Edinburgh’s Christmas – to an area of hard standing elsewhere in the city centre. 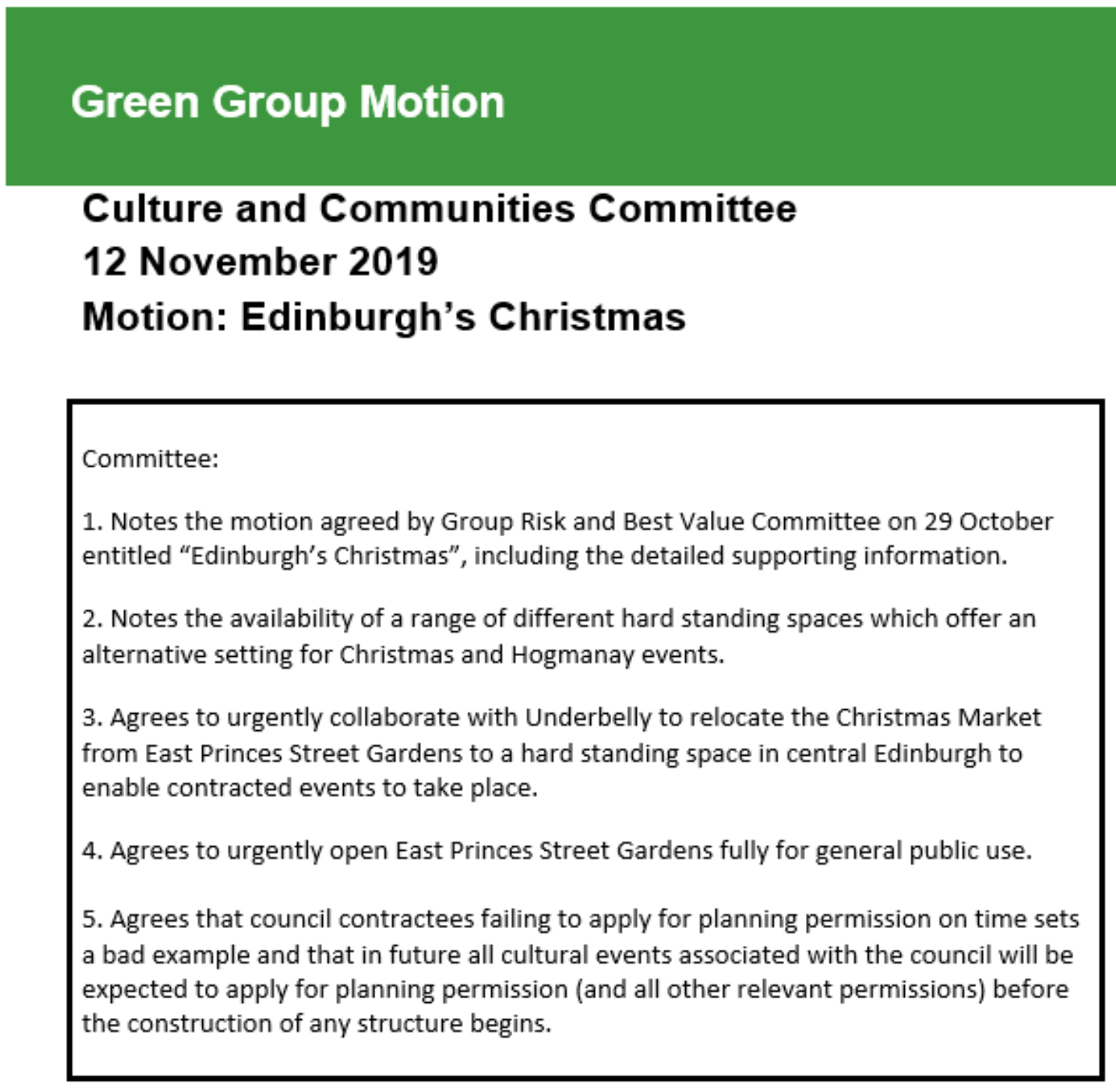 An amendment for the Conservative Group was moved by Councillor Max Mitchell (see below or go here). 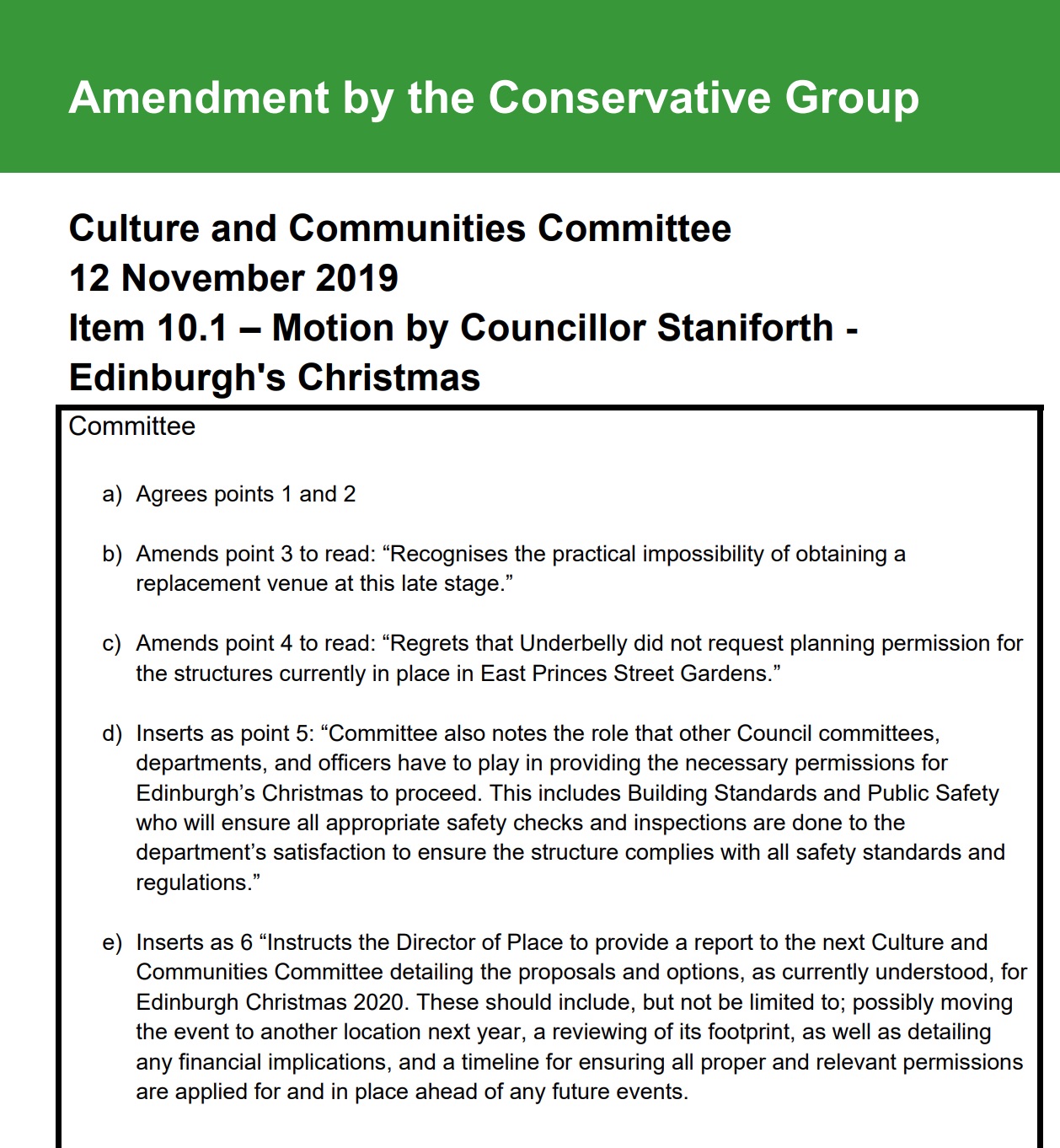 Cllr Alex Staniforth accepted Parts D and E of the Conservative amendment, describing them as ‘quite reasonable’. He stood by his own Points 3 and 4.

He acknowledged that not all his suggestions could be achieved in time, and that legally councillors could not insist the Winter Festivals be moved. But his motion would send a clear message to Underbelly that they cannot continue to treat Council, Committee and the city with contempt. This morning’s evasion of questions earlier had been unacceptable.

People should have been better consulted about EPSG in advance.

Cllr Susan Rae seconded. She deplored Underbelly’s failure to acknowledge the feeling in the city. They should ‘Wake up and smell the zeitgeist!’ People are extremely upset.

Underbelly have continued to make mistakes, she said, even in the glare of social-media attention. Edinburgh is not Underbelly’s city to own and operate as they see fit.

Cllr Max Mitchell apologised in advance for rambling and then repeatedly said sorry for repeating himself afterwards. He stressed that the Conservative amendment sought a similar but more practical and sensible response. It would be impossible to find hard standing elsewhere at short notice, and legal liabilities would result. Moving events to green spaces elsewhere would create new problems and objections.

The forthcoming consultation would provide a more formal and reasoned approach to resolving the problems. The flawed scheme of delegation process will become clearer when a report goes before the Policy and Sustainability Committee on 26 November.

These mistakes must not happen again.

Cllr Phil Doggart said the reputation of the Council has been severely damaged. The likely severe impact of the EPSG structure should have meant local ward councillors were informed much earlier. There are anomalies in accounts of how much about the scheme was known when.

Looking forward, he said, we must ensure mistakes of commission and communication are addressed. Hence Point E in amendment. He wants a full understanding of Edinburgh’s Christmas 2020 well in advance. ‘I am not prepared to be played for a fool by Underbelly’, which he accused of evasion and distraction this morning. ‘No more, no more. The people of this city deserve better.’

Cllr Hal Osler supported the Conservative amendment. The problems are not just about Underbelly. Fundamental issues of governance here must be looked into. Must not be a recurring issue. Sort it out. ‘This is all of our fault as it stands. We have to wear it this year. Next year we must do much much better.’

Cllr Karen Doran described longstanding problems with the Winter Festivals, but couldn’t support Cllr Staniforth’s impractical motion. She stressed EPSG’s importance to the whole city. They should always be accessible to everyone. Consultation must prevent a repeat of the problem.

Cllr Ian Campbell wanted the Winter Festival to attract Christmas shoppers to a troubled high street. However, the Festivals and Underbelly must serve the city. We cannot allow over-exploitation of available space in EPSG.

Cllr Donald Wilson said he supported the motion and the amendment. Root-and-branch consultation was a condition of extending the contract. Too late to rectify this year’s Winter Festival. Need close look going forward. ‘I don’t like or agree with devolved decision making – we should exercise it as seldom as possible’. Consultation process will be a real one and will start soon.

Cllr McNeese-Mechan said ‘We all feel passionate about this’. Consultation will be really in-depth across the city. The Council is committed to engage. We must learn lessons from this year, and lay out options clearly for the future.

Summing up, Cllr Staniforth concluded that councillors were not very divided. There was no suggestion of cancelling the Christmas Market or moving it from the city centre. There were minor disagreements about practicalities. We’re agreed on inappropriate behaviour by Underbelly and lack of consultation. We’re relatively united.

In conclusion, two members voted for the motion and nine for the amendment. 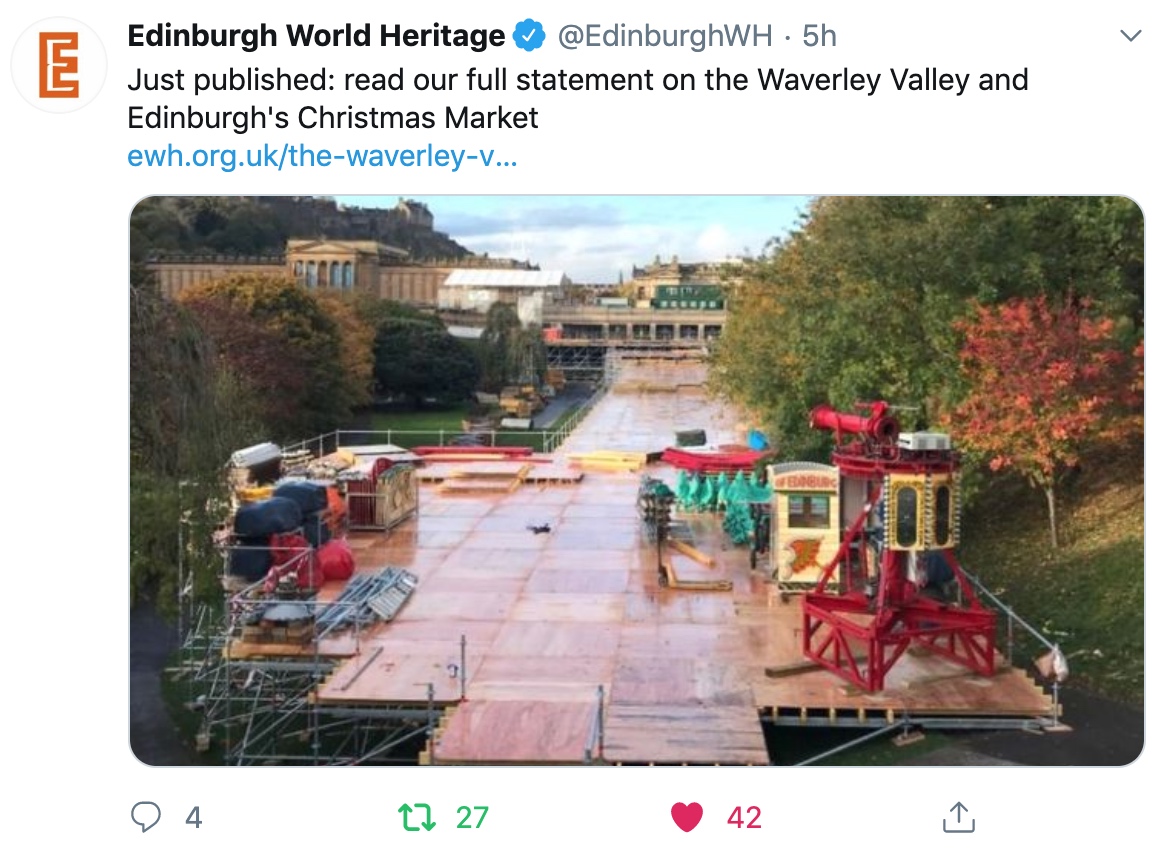 2. Letter from the Cockburn Association. 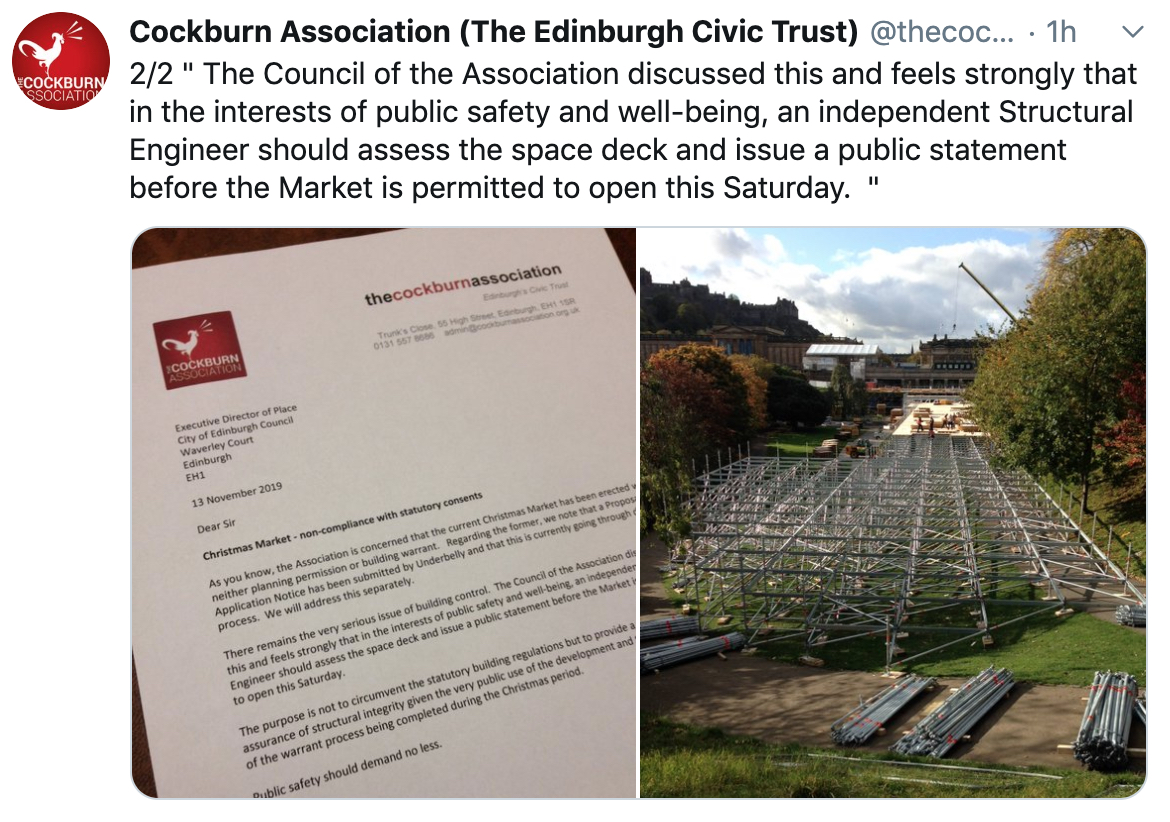 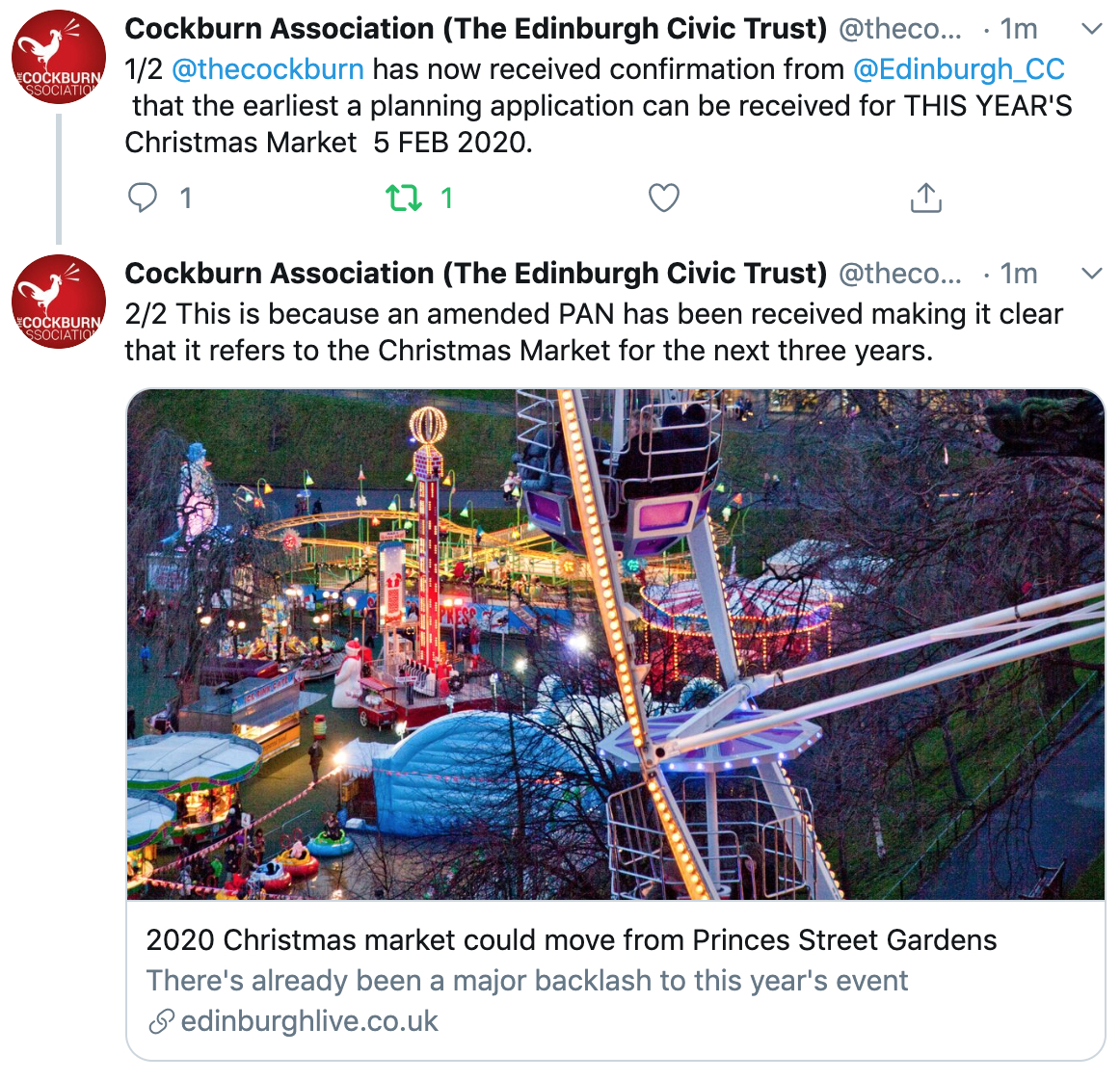 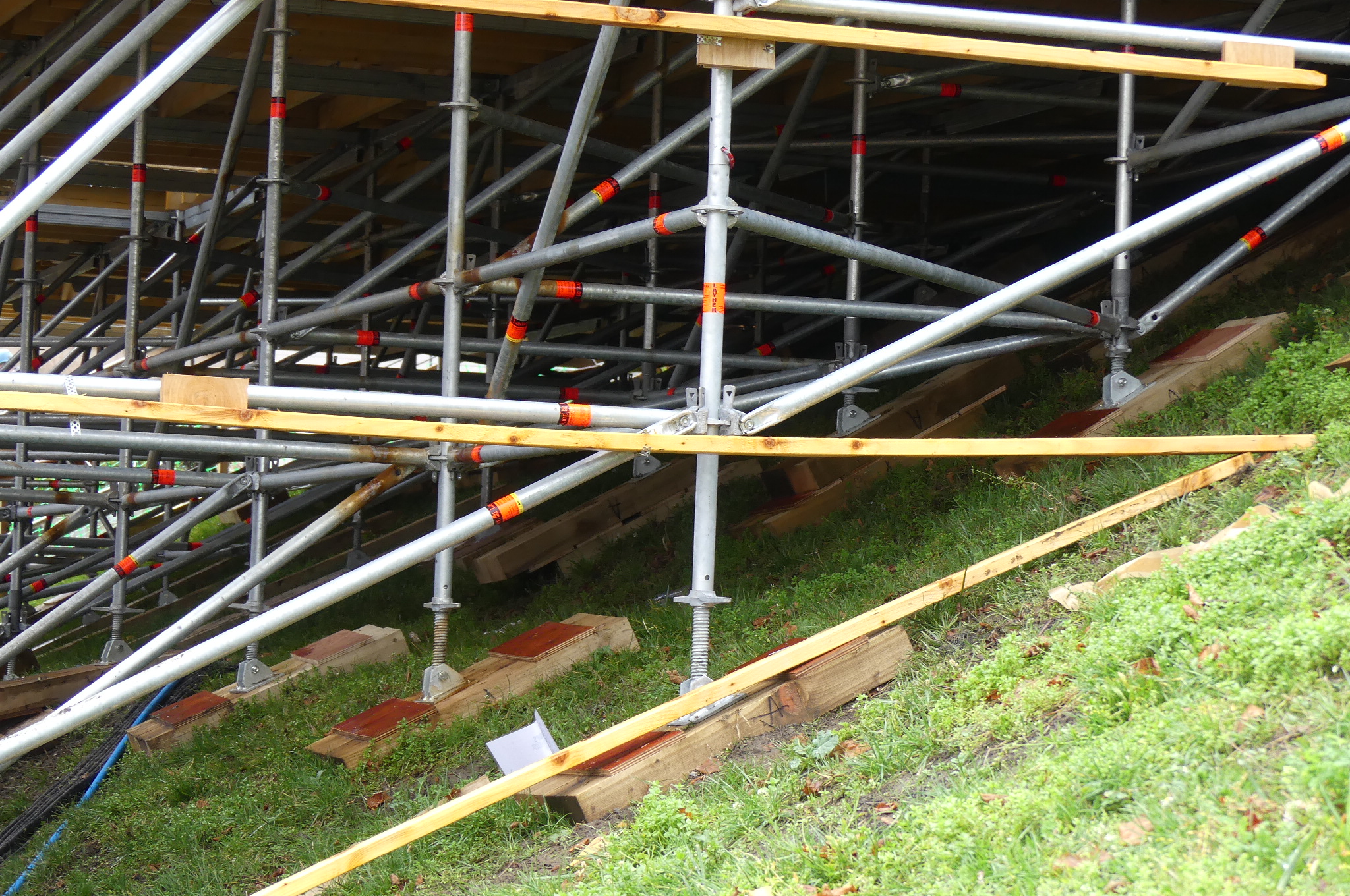 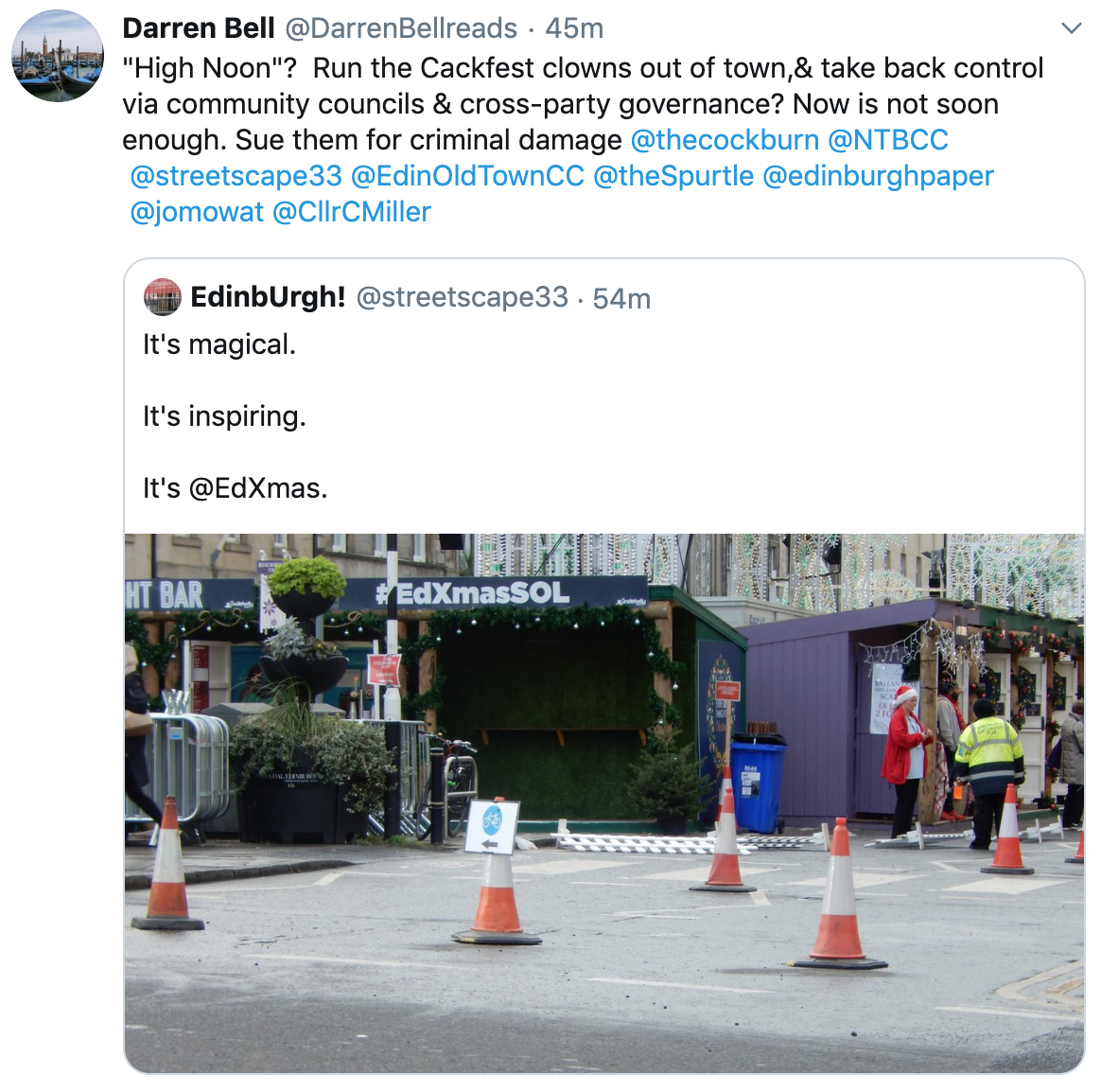 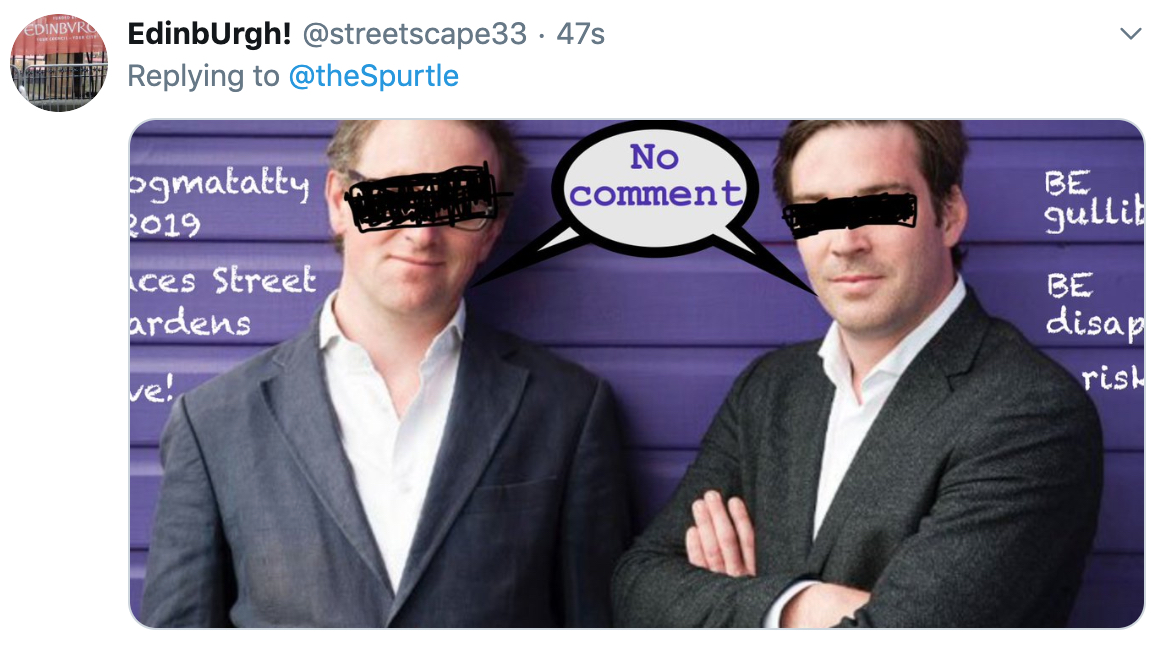 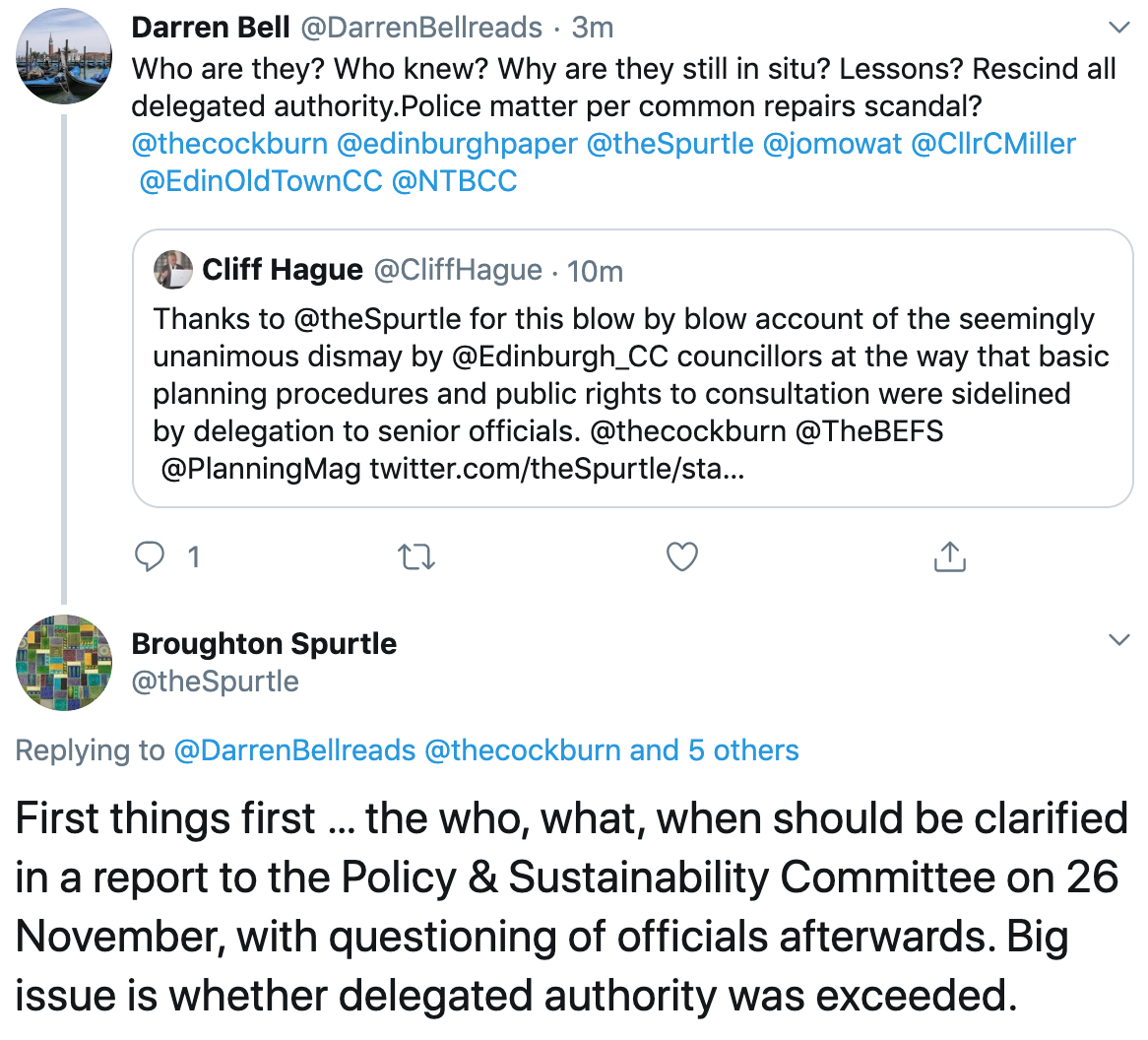 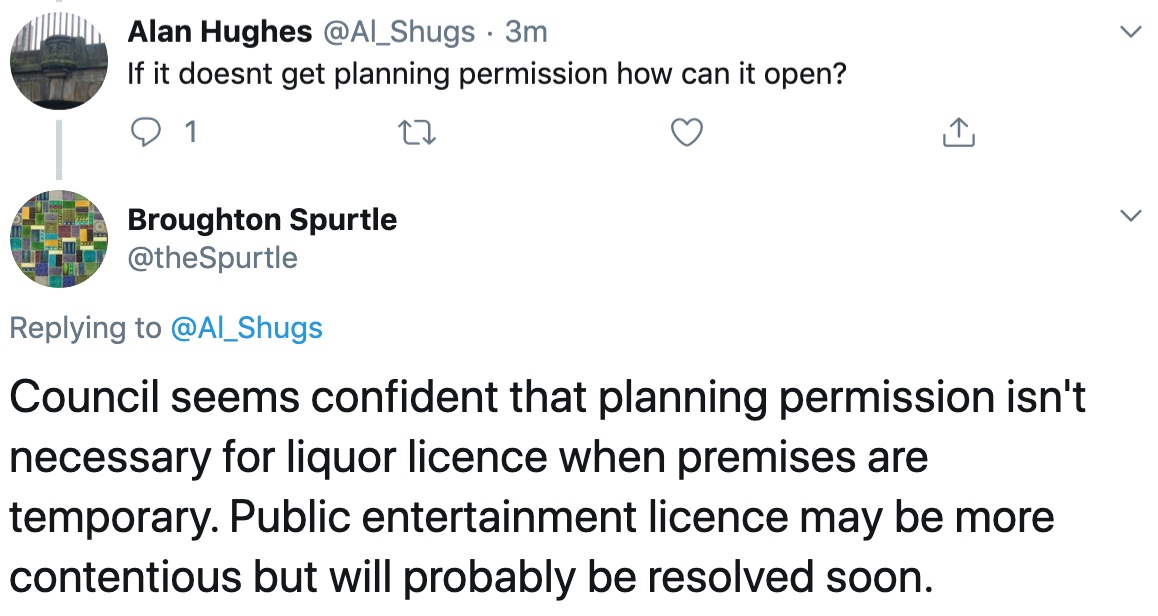 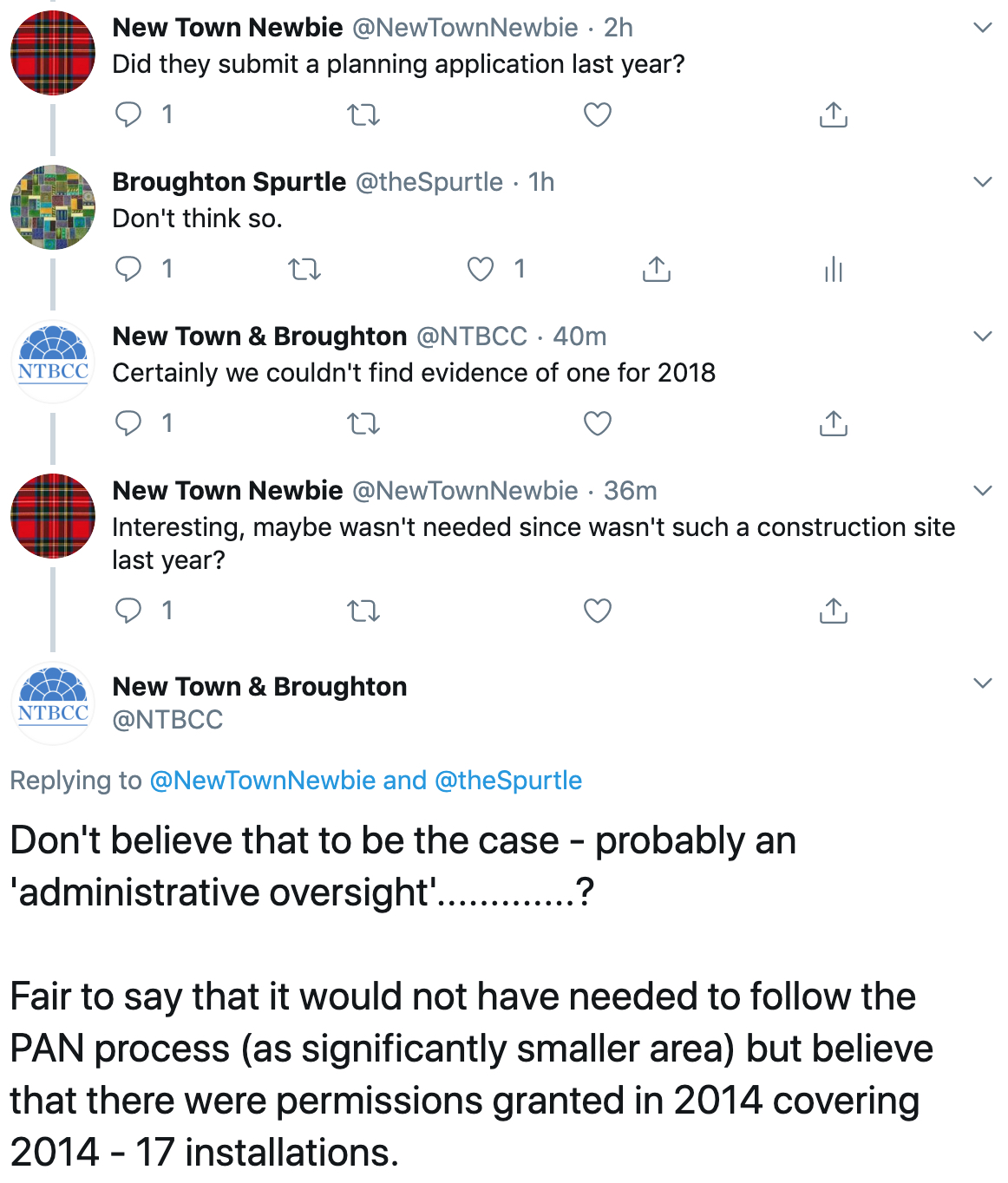