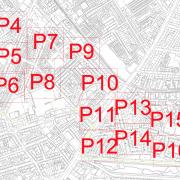 It was intended to explain to, and answer questions from, the public about proposals for bin-hubs across Broughton.

Some of those who attended (mostly, we think, in the Edinburgh World Heritage Site) had received postal notification of the event. Others in Broughton received no notification, and depended on publicity from Spurtle and the New Town & Broughton Community Council.

Not the Council’s finest hour

Nevertheless many people attended. In the crowded Garden Room, three beleaguered representatives (one Waste Management specialist), one Council roads engineer, and one bin-consultant from Changeworks yelled answers to yelled questions from behind face masks. The event was a farce.

No one could easily hear anything. Everyone was shouting at everybody else to make themselves heard.

Frustrated members of the public interrupted each other in an effort to secure attention.

There was no management of numbers. Social distancing went out of the window.

There was scarcely any printed material to consult, and what there was could not be taken away because there weren’t enough copies.

There were no maps displayed showing where the bin-hubs may go. This was apparently because the plans have not been finalised. However, representatives were confused to learn that maps for their N1 area (the subject of this event) were already freely available on the Council’s website.

There were no forms for members of the public to fill in with their opinions. Council representatives occasionally struggled to take down points on their mobile phones.

There was no clarity about if, when, and how further rounds of consultation on bin-hub locations may take place. 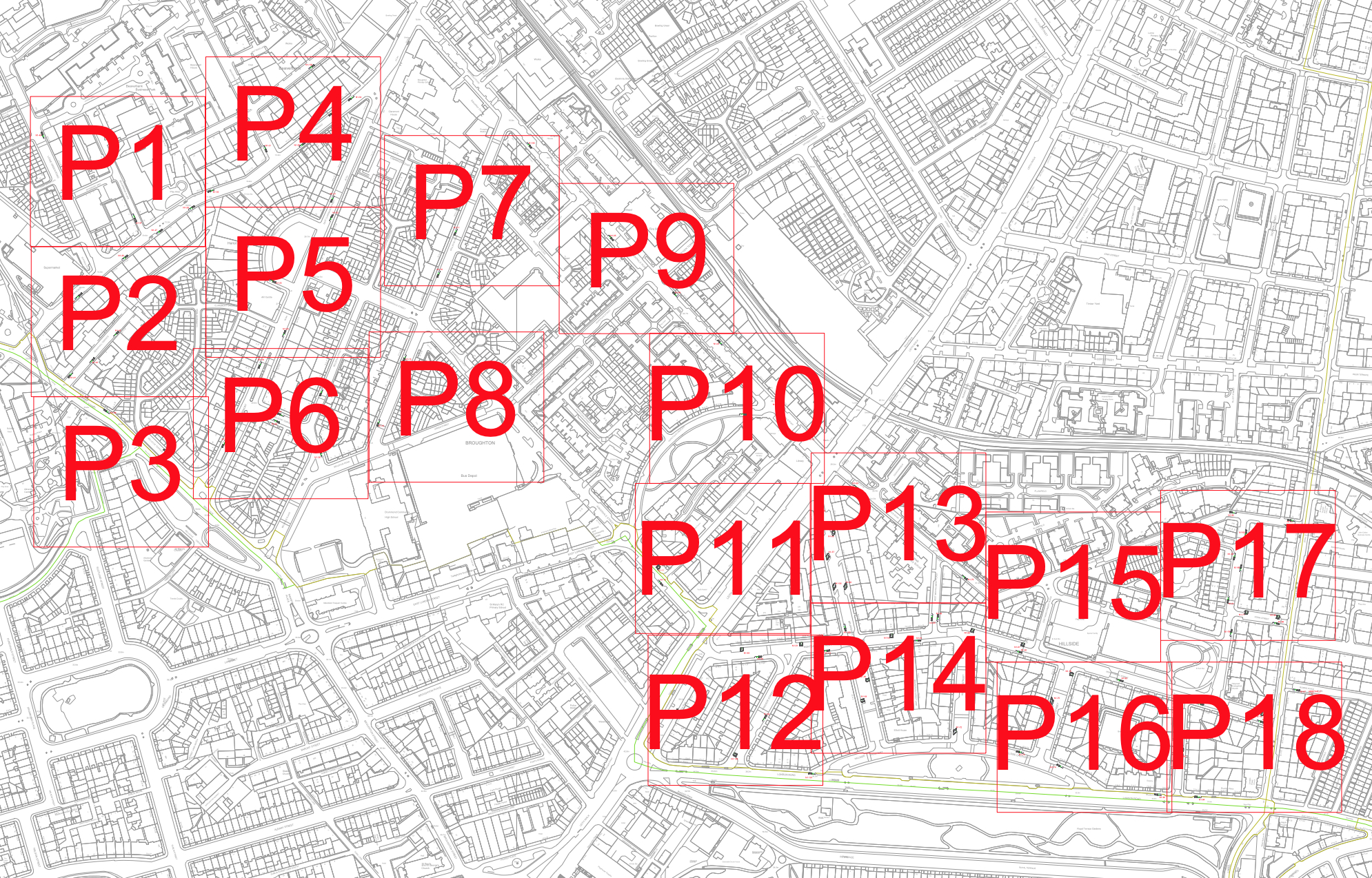 In short, an utter shambles

It did nothing to restore confidence in the Council’s ability or willingness to listen and learn. It felt like a one-way conversation; the repetition of an as yet half-baked plan based on an irreversible decision.

Spurtle suspects it will have disillusioned most of those who attended, and hardened opposition to the bin-hub proposals, particularly across the New Town. 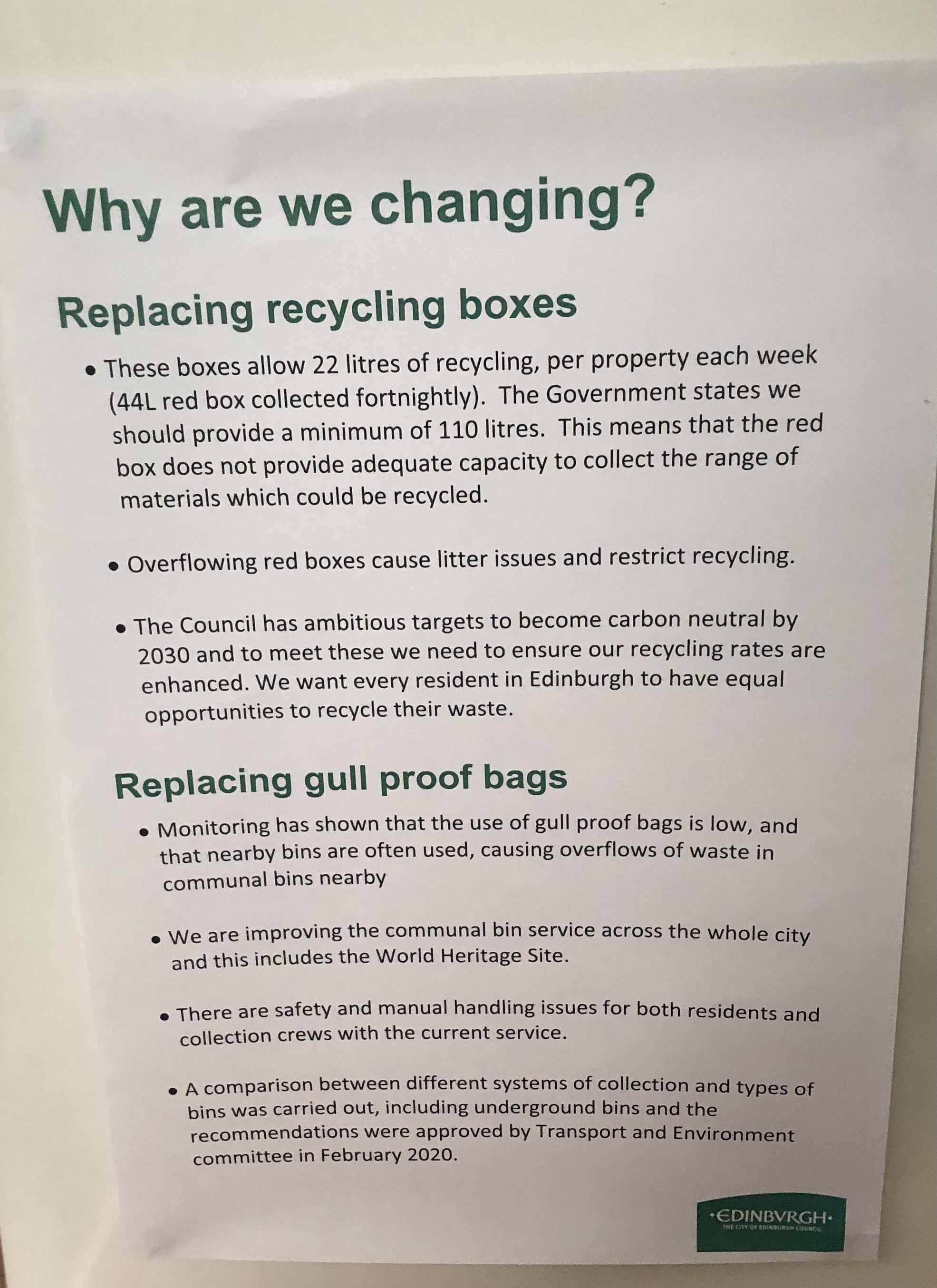 What did we learn?

The Council claims bin-hubs will improve: 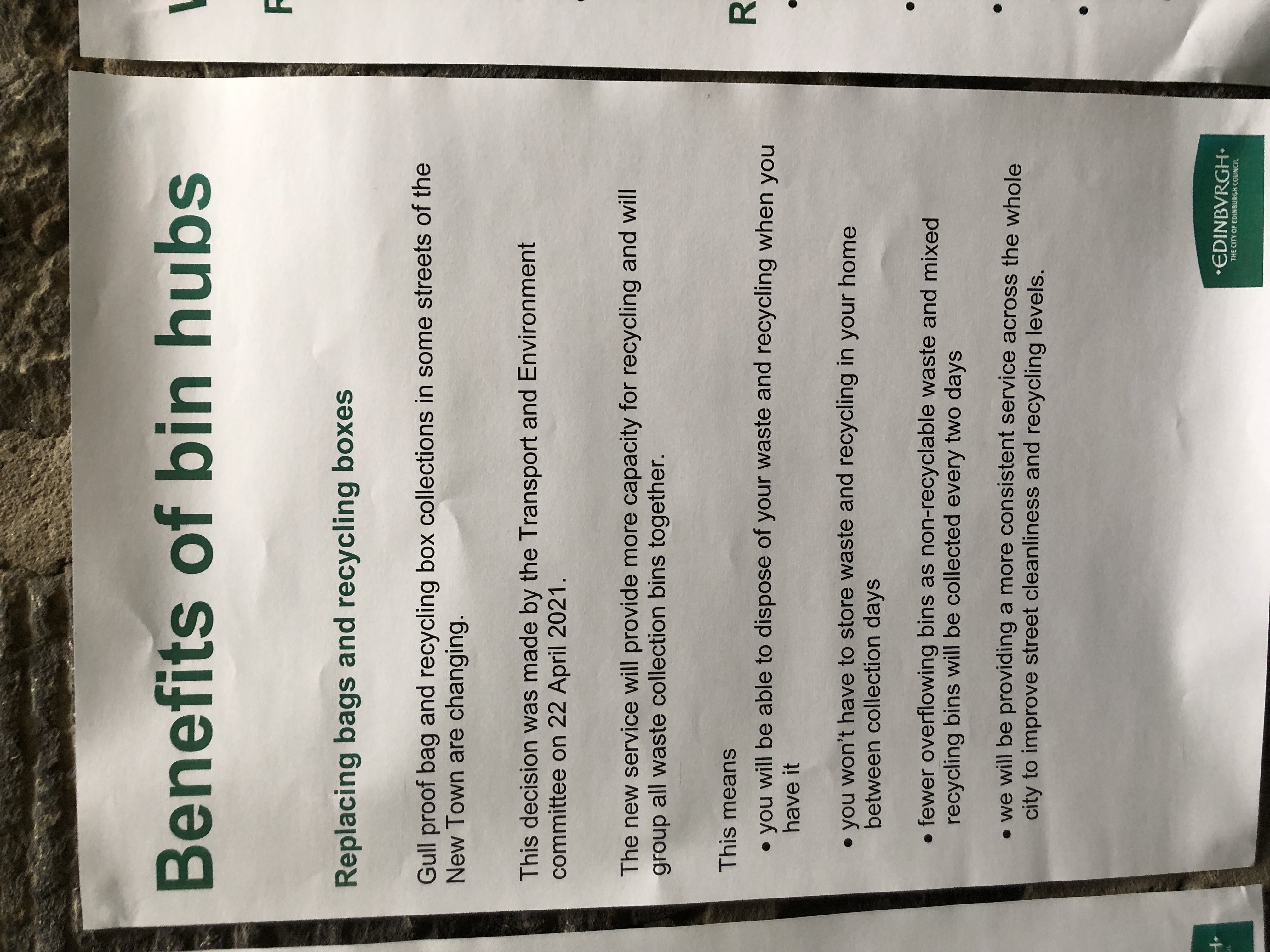 Questions still to be answered include: 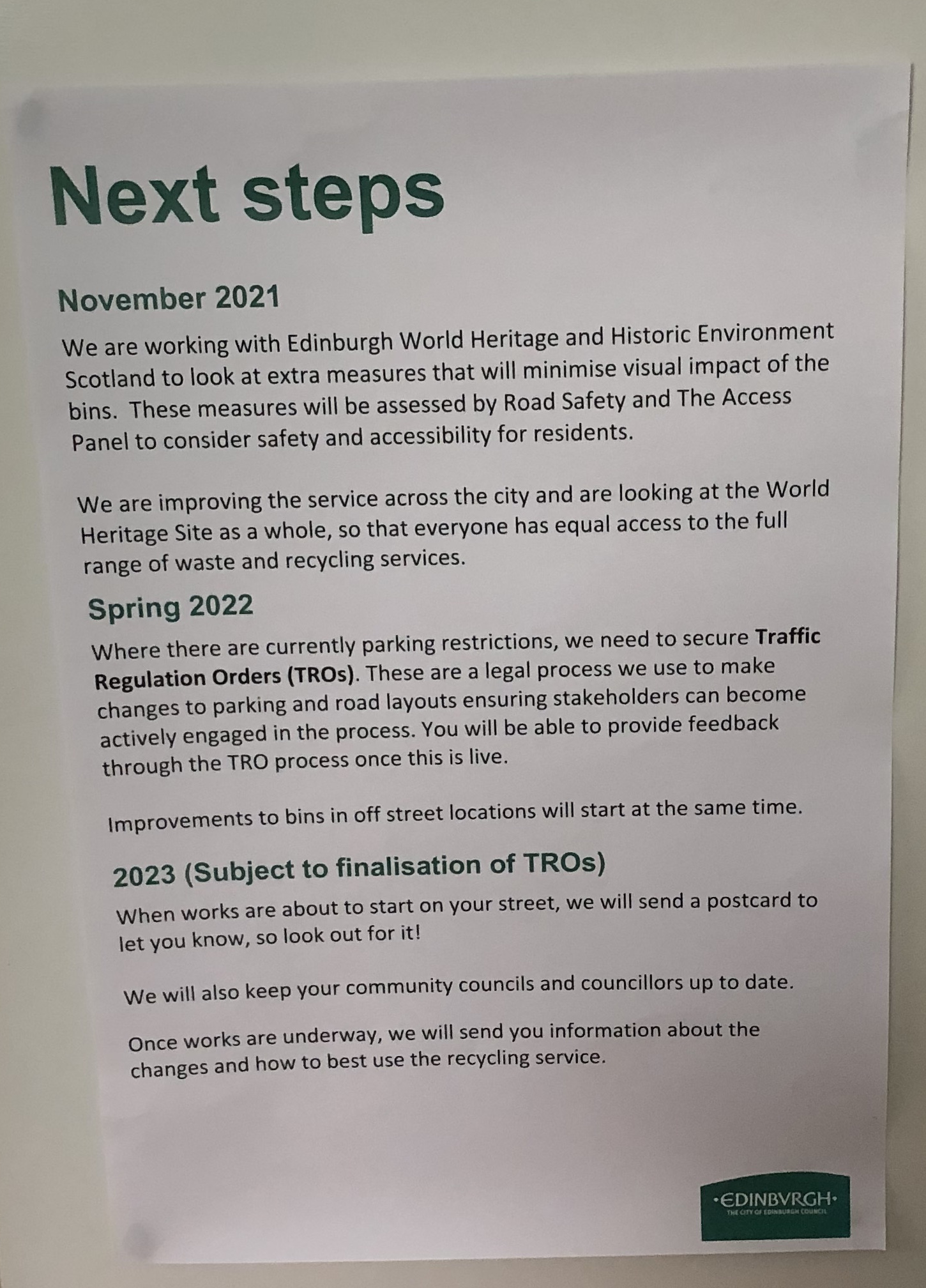 In the absence of clear practical guidance at today’s event, we turn to the Council’s website for clues. It seems we have until 3 December to respond by email here quoting the reference TRO 21/16.

And to repeat, detailed maps of possible bin locations in the N1 area are available here.

It is to be hoped that future engagement events will be much better organised, more informative, and more meaningful. They are scheduled as follows: 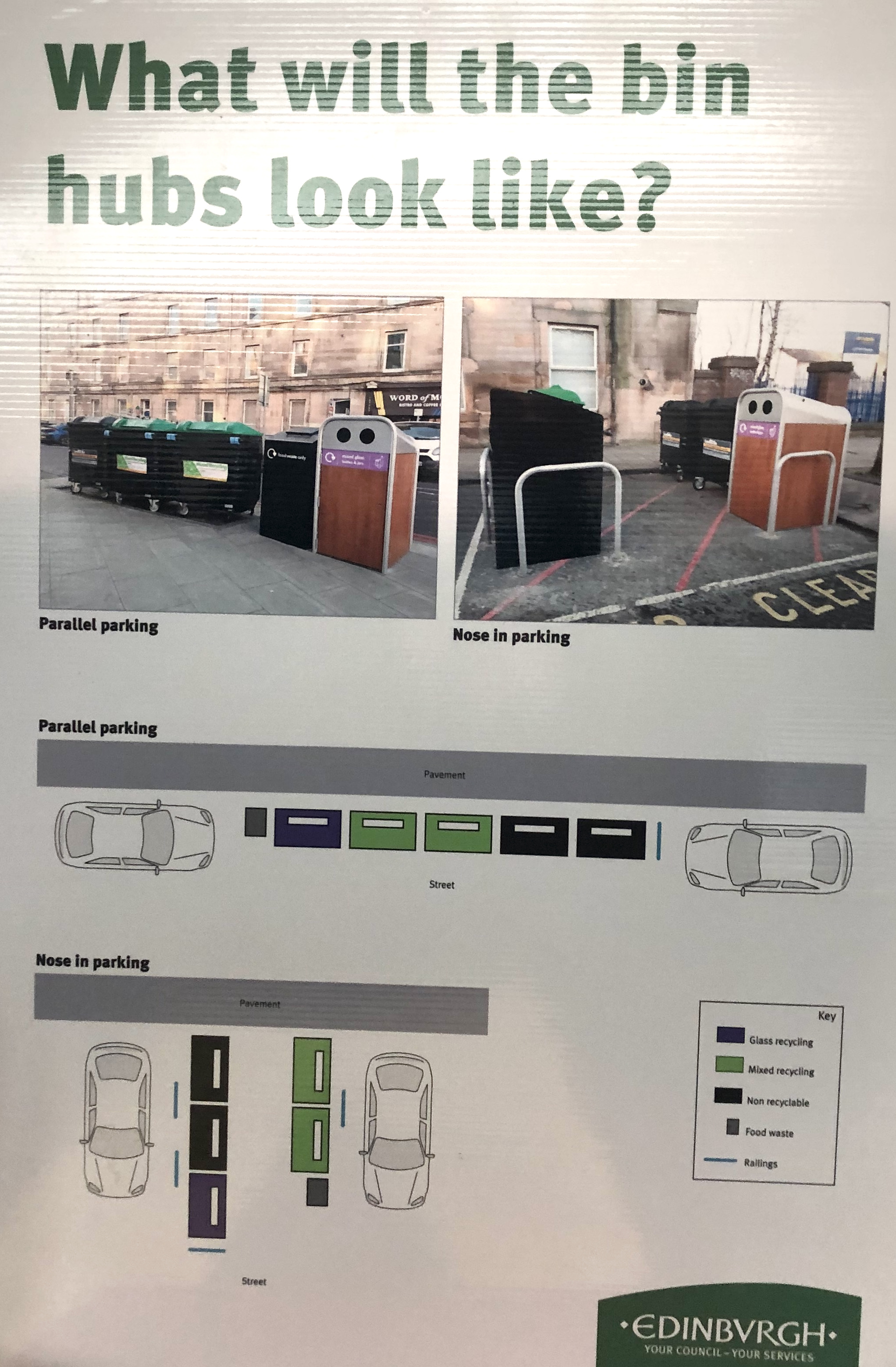 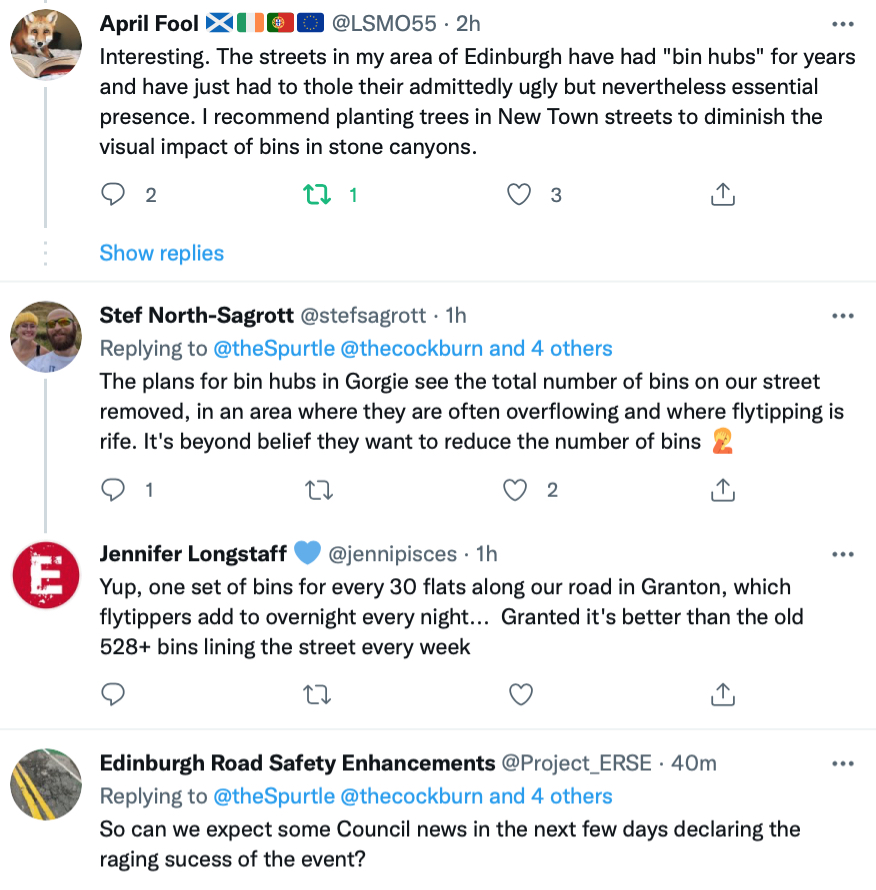 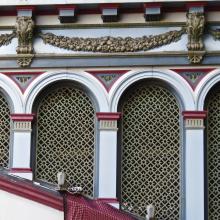 No excuses for bad bin behaviour 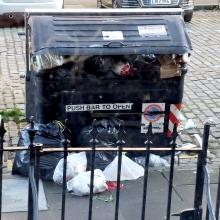 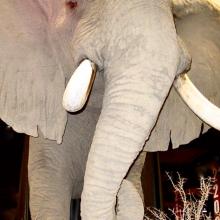 COUNCIL TO ‘ENGAGE’ BY TELLING 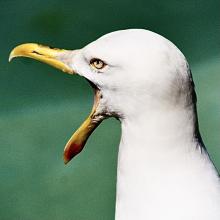