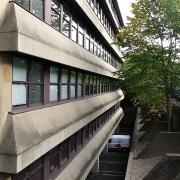 You can read MMMARS Dundas Ltd’s detailed planning applications for the sites here and here. They mean to demolish Centrum and BUPA Houses and replace them with 44 flats and 3 ground-floor commercial units.

We reproduce the neighbours’ position statement below. In short, they dispute the validity of changing the street line, deplore the loss of softening foliage, resent loss of light and views, and dislike what they see as the design’s overbearing banality.

Spurtle does not have copyright clearance to show the architect’s photomontage of the proposal. However, readers may access it quickly on p. 40 here.

To formally express your views – for or against – go here and here.

The deadline for comments is 29 January. 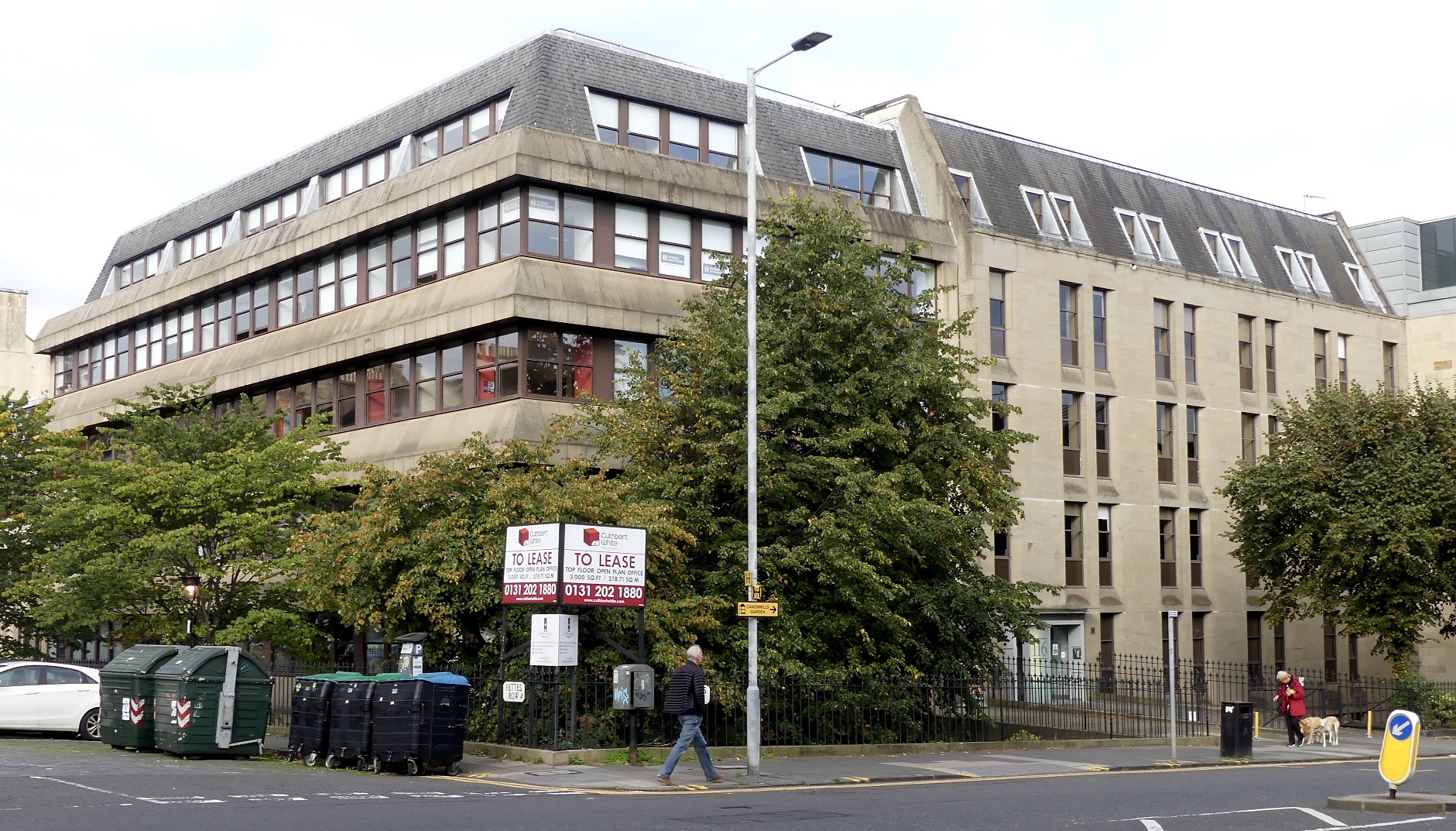 We are residents of Dundas Street and Fettes Row who have serious concerns about the planning applications of 16 December 2020, which propose to demolish existing buildings and erect a mixed-use development at this site.

We have composed this paper to set out our views and hope you will support them.

The proposal, together with separate application 20/03034/FUL, would completely change this part of the New Town. We have substantial concerns about that application. This paper, however, is solely about 20/05645/FUL (and associated 20/05646/CON).

Destruction of this area

We object to the removal of trees and proposed new building line long the Dundas Street and Fettes Row frontages. Clearly this is intended to expand the development footprint. However, the planning application claims that it is to establish a building line consistent with the rest of the street, and reflects a historic lack of trees on the street.

In fact, the proposal fails to reflect how the character of the area today. It has developed a distinct character over recent decades; it is now exactly the kind of attractive local people-focussed streetscape which the Council so often aims for. As local residents we are well-placed to confirm that it is a successful ‘place’.

The planning application accepts that the historical form of the street was very mixed. There is no definitive historical ‘line’. But the application claims consistency with the tenements to the north and in Henderson Row (a completely different street). In fact, most if not all other buildings in the neighbourhood are set back from the street; the tenements are the anomaly. The application selectively chooses some street features to support its claims while ignoring other, more relevant ones.

It also says street trees are not a feature of the New Town. However, the trees in front of 108-116 Dundas St have been a major feature of this part of the New Town for some 40 years. They are a welcome natural break in the local landscape. At 40 years old, they are not easily replaced. In 2006, the Council’s officers reporting onPlanning Application 05/04303/FUL (at 113 Dundas Street) wrote that ‘retention of the planted areas will soften the approaches to the building. The proposals are acceptable and preserve the character and appearance of the conservation area.’ The Council’s own George St improvement schemes consider new street trees.

The application claims 'There are no trees, hedges, boundary walls, railings, paving or other features on site which contribute positively to the character of the area. The existing trees on the Dundas Street frontage are incongruous and make a neutral contribution.' As local residents, we disagree. Below, we compare pictures from the developer’s documents and ask which is incongruous and makes a neutral contribution?

The proposed facades are oppressive, unimaginative, and unwanted. New developments should stand the test of time, but 40 years from now, residents and visitors would wonder how these proposals were conceivably considered an improvement. The existing buildings are at least softened by trees, the proposed ones cannot be.

The proposals breach the standards set out in the City of Edinburgh Council’s Edinburgh Design Guide in many ways. Just a few examples:

Page 8 The key aims for new development are:...reinforce its surroundings by conserving and enhancing the character and appearance of the landscape and townscape; including protecting …locally important views; ... incorporate and use features worthy of retention, including natural features, buildings and views;

Section 1.1 Appraising the site and context

Page 43 ‘The key aims are for new development to: Have a positive impact on the immediate surroundings; wider environment; landscape and views … positioning of the buildings on site ... to create or help to reinforce a the sense of place, urban vitality …’.

Section 64 of the Planning (Listed Buildings and Conservation Areas) (Scotland) Act 1997 states special attention should be paid to the desirability of preserving or enhancing the character or appearance of the conservation area. This development does not.

Policy Env 1 of the ELDP relating to the Edinburgh World Heritage Site prohibits development which would harm the outstanding universal qualities of the Site or would have a detrimental impact on its setting.

ELDP Policy Des 1 Design Quality and Context states permission will be granted for proposals which create or contribute towards a sense of place; they should draw on positive characteristics of the surrounding area. The application claims the proposals will do so by emphasising the predominantly residential character of the surrounding area, providing active uses at street level, helping to improve the vitality of the streetscape. This is a staggering misjudgment which, as we have already said, misinterprets the character of the area. It is residential, but the street character depends in large part on the natural break.

‘Proposals for the demolition of any building within a conservation area, whether listed or not, will not normally be permitted unless a detailed planning application is approved for a replacement building which enhances or preserves the character of the area ….’

‘consent to a development should only be granted if it (b) preserves trees, hedges and other features which contribute positively to the character of the area’.

The proposal would significantly impact on daylight, sunlight as well as views, outlook and amenity of a number of residences. The Council’s own website currently advises Edinburgh residents that looking at the view out of their windows can improve mental health and well being.

We have other concerns about the development; too many to list here in detail. They are included in the comments which individual residents will submit to the Council.

We have no problem with the principle of a mixed use of these buildings. However, it appears that office space in the existing buildings has, in recent years, been well let, and we’ve seen no hard evidence that they are under-used. Changing the balance of residential/office use will affect local shops, which are characterised by their variety and independent nature.

The application, however, has the hallmarks of corporate chain culture, and it is easy to foresee multinational café/restaurant chains, for example, squeezing out local businesses.

Similarly, we have seen no convincing evidence that the existing buildings cannot be repurposed.

The Planning Statement claims that 'The views and issues discussed have been taken into consideration when revising the scheme.' We dispute this. The time that elapsed after PAN consultation closed (20 November) and submission of the planning application (16 December), indicates that serious consideration was not given to amending the proposal.

What we object to is the clumsy, overbearing and unsympathetic proposal which has been put forward. It claims to ‘improve’, but in fact destroys much that is best about the immediate area. 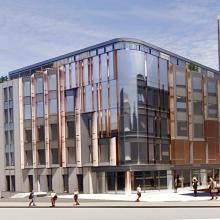 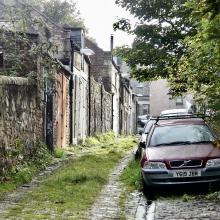 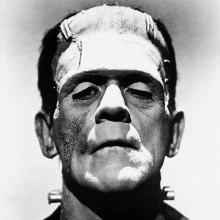